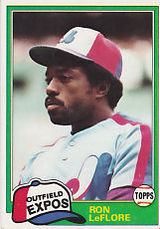 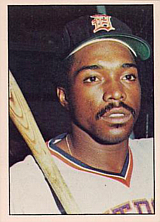 Detroit Tigers manager Billy Martin heard about Ron LeFlore when LeFlore was serving time in prison for armed robbery. He was signed by Detroit immediately upon his release and did not disappoint. With strong, powerful legs and blazing speed, LeFlore was perfectly suited for stealing bases and beating out infield grounders for hits. During his nine-year career, the husky, fleet-footed outfielder averaged almost 50 base-thefts per season and once stole 97. A solid .288 career hitter, he was sometimes a liability in the field and struck out excessively. His story was considered a model of a successful rehabilitation, and a well-regarded television treatment of his life story entitled: One a Million: the Ron LeFlore Story, starring LeVar Burton, was produced in 1978 and shown in prime time. It was based on his autobiography, Breakout: From Prison to the Big Leagues, which he published earlier that year.

LeFlore led the American League with 68 stolen bases in 1978 with the Tigers. In 1980, with the Montreal Expos, he led the National League with 97, thus becoming the first player to lead both leagues in steals in his career. His 97 steals are the Expos and Washington Nationals franchise record for a season, ahead of Tim Raines and Marquis Grissom. He left the Expos as a free agent after that season to sign a large contract with the Chicago White Sox in 1981, but his time there was not successful, as he is best remembered on the South Side for misplaying a routine fly ball into a rare four-base error. He played his last game at the end of the 1982 season. After he retired, it became known that he was in fact four years older than had been claimed while he was playing, explaining his rapid decline.

In 1989, he played for the St. Petersburg Pelicans and Bradenton Explorers of the Senior Professional Baseball Association. LeFlore batted .328 in 44 games with both teams; 11 games with St. Petersburg and 33 games with Bradenton. In 1990, he played for the Florida Tropics of the SPBA. He played in 18 games and had 2 home runs and 9 RBI. He also had the second-highest batting average with .403 when the league folded.

The similarity scores method chooses players for some reason who were not as prominent as LeFlore, with perhaps the best-known of the comparisons being Mookie Wilson.

Ron has struggled after he stopped playing. He managed a couple of times in independent ball and for a time promoted a product to wrap around the handle of a bat. He took umpiring classes, hoping to get into the profession, but did not do well enough to be offered a job in the minor leagues. He was arrested briefly on two occasions for failure to make child support payments. He has also had troubles financially and a Sports Illustrated article from April 17, 2009 said this about Ron and his wife: "The couple lives check to check, trying to squeeze every nickel and dime out of Ron's monthly MLB pension payments."

Ron's cousin, Todd Steverson, had a brief big league career and most recently served as hitting coach for the White Sox.