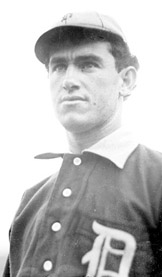 Matty McIntyre was a star outfielder in the 1900s who was a part of the second-best outfield of all time. 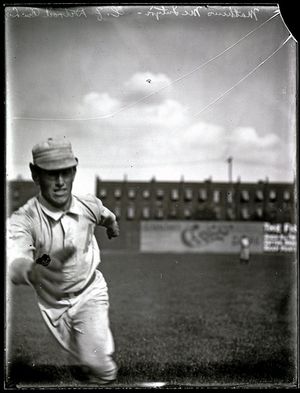 Action shot of Matty taken in 1910

He made his major league debut in 1901 with the Philadelphia Athletics, in the American League's first year as a major league. He was born in Connecticut but had grown up on Staten Island, NY and was hitting .292 for Augusta of the New England League when the league folded in June 1901 and he was picked up by the A's. He hit .276 in 82 games in his rookie season, but was still sent back to the minors for more seasoning in 1902. He spent 1902 with Newark of the Eastern League, then hit a solid .342 for Buffalo of the same league in 1903, after flirting with .400 for much of the summer. That prompted his purchase by the Detroit Tigers at the end of the year.

McIntyre earned a starting spot in the Tigers' outfield in spring training of 1904 and would be a fixture for the team for several years, mostly playing left field with Ty Cobb and Sam Crawford as the other outfielders. He was a very good fielder, a fast baserunner and an excellent bunter, reminding many observers of the great Willie Keeler. He hit .253 in 152 games in his first season in Detroit, then upped his average to .263 in 1905, when he became the team's leadoff hitter. A left-handed batter, he was known for being equally tough on southpaws, a result of his taking extensive batting practice against any portsider he could find. Late in the 1905 season, the young Ty Cobb joined the team, but he and McIntyre would quickly begin to clash; McIntyre was the leader of a gang including catcher Boss Schmidt who picked on Cobb in his rookie year of 1906. Some people believe that McIntyre's behavior was the reason that Cobb turned so angry and thought the world was against him. That season was also memorable for other reasons, including a famous feud between McIntyre and manager Bill Armour, who lifted him from a game for not chasing a fly ball to the outfield fence, then suspended him when he protested. He was eventually reinstated after a few days and hit .260 for the year with 29 stolen bases, but this was one of a number of clashes between Armour and his troops that cost the manager his job after the season.

1907 was a lost season for McIntyre. He held out until right before opening day, while trade rumors swirled around his name, but after only 20 games, he broke his ankle sliding into first base, putting him out for the season. As a result, he missed the Tigers' first appearance in a World Series that year. In 1908 he hit .295 (fifth in the league) with 13 triples. He led the league that year in plate appearances, runs scored, and times on base. That season, the Tigers' outfield of McIntyre, Cobb and Sam Crawford was the second best of all-time, as calculated by the Win Shares method. He appeared in both the 1908 World Series (he went 4 for 18 as the Tigers lost to the Chicago Cubs) and the 1909 World Series. However, the latter season, he had hit only for a .244 average and only went to bat three times in the Series. He had lost much of his speed because of his 1907 ankle injury, and his defense was suffering as well.

After the 1909 season, Matty McIntyre organized a team of mainly Detroit players who went to Cuba to barnstorm. The experience was positive, and McIntyre returned to the island regularly in subsequent years He was even a member of the Almendares team in the Cuban Winter League in 1911 and a teammate of the great José Méndez. In 1910, he played in only 83 games with a .236 average and gradually lost his job to Davy Jones. He was sold to the Chicago White Sox after the season, where he experienced a rebirth in 1911. That year, he hit .323 with 11 triples and scored 102 runs as the Sox's regular right fielder. However, he fell off a cliff in 1912, as his batting average tumbled all the way to .167 and he was sold to San Francisco of the Pacific Coast League before the season ended.

McIntyre played for the Providence Grays of the International League in both 1913 and 1914; that second year, Providence won the pennant behind the pitching of teammates Carl Mays and Babe Ruth. He hit .310 that season, then became manager of the Lincoln Tigers of the Western League in 1915, moving on to the Mobile Sea Gulls of the Southern Association in 1916. He then played for semi-pro clubs in the Detroit area over the next seasons.

He fell victim to the influenza epidemic that swept across the globe at the end of World War I, and while he recovered, his health remained poor and he died before he was 40. His obituary in the Detroit Free Press called him a "Favorite Tiger". His main teammates included Sam Crawford (3401) and Ty Cobb (2801).