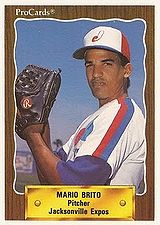 Pitcher Mario Brito spent 14 years in professional baseball, including six in AAA. He was 68-55 in Organized Baseball and 7-12 in Asia.

He was the player to be named later when Tim Raines and Jeff Carter were traded to the Chicago White Sox for Ivan Calderon and Barry Jones on December 23, 1990. The Expos sent Brito to the White Sox to complete the trade on February 15, 1991.

Brito had a horrible year in the White Sox system, leading their farmhands with 14 losses. He was 0-10 with a 7.12 ERA for the Vancouver Canadians in his AAA debut and was 2-4 with a 3.30 ERA after a demotion to the Birmingham Barons.

Joining the Milwaukee Brewers organization, Brito spent his first full year in AAA. He went 6-2 with 11 saves and a 2.50 ERA in 40 outings for the New Orleans Zephyrs, splitting closing duties with Ron Rightnowar. Brito fanned 74 and allowed 39 hits and 20 walks in 57 2/3 IP.

Brito again dazzled in winter ball, allowing only one earned run in 28 innings for Escogido and setting the Dominican League record with 19 saves. He was 1-0, fanned 34 and allowed 24 baserunners. Baseball America named him a "Winter League All-Star". He saved two more in the playoffs but allowed another earned run in 7 innings.

The Florida Marlins signed the forkballer. He started 1996 strong with the Charlotte Knights, winning one and saving four in six games, whiffing one and allowing 3 hits, two walks and one run in five innings. He did not stay in the Florida system long, going to Japan to join the Yomiuri Giants. In 39 games, he was 3-2 with 19 saves and a 3.33 ERA despite allowing just over a hit per inning. He pitched a scoreless 8th inning in game three of the 1996 Japan Series, which Yomiuri lost; they lost the Series, 4 games to 1.