Note: This page is for 1990s pitcher Jeff Carter; for the minor league player and manager of the same name, click here. 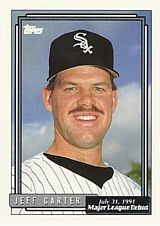 In 1990, pitching for the Jacksonville Expos, Jeff Carter topped the Southern League with a 1.84 ERA, 15 saves and an 8-3 record. He was included in the trade that sent Tim Raines from the Montreal Expos to the Chicago White Sox after the season. Jeff pitched 5 career games, all with the ChiSox in 1991. He started twice and took a loss on August 15th against the Detroit Tigers. He pitched five innings in that game, giving up 4 hits, 5 earned runs, walking 4 and striking out 4. He gave up one home run in his major league career; to Lou Whitaker.