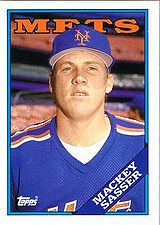 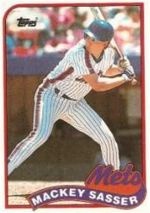 Mackey Sasser had a nine-year career in the majors. Although he was mostly a catcher (283 games), he sometimes played outfield (69 games), first base (24 games), DH (19 games) and even third base (2 games).

He attended Amos P. Godby High School, where he played basketball and was an All-Conference football quarterback.

In Double A with the Shreveport Captains in 1986, he hit .293/~.357/.415 with 5 home runs in a very pitcher-friendly stadium. He made the Texas League All-Star team at catcher and his 13 intentional walks were the most in the league. He was picked as the 9th-best prospect in the league by Baseball America.

That 1987 season was split between the Giants and the Pittsburgh Pirates organizations, both at the major league and minor league levels, as he was traded on July 31st with $50,000 for Don Robinson. Sasser batted .318/~.368/.405 for the AAA Phoenix Giants and Vancouver Canadians and .185/.185/.185 in his first 27 at-bats in the major leagues. Mackey made the Pacific Coast League All-Star team at catcher, his third straight All-Star selection.

He was traded again, prior to the 1988 season, to the New York Mets with Tim Drummond for Randy Milligan and Scott Henion. He was to play in New York for five seasons, the bulk of his major league career.

For the Mets in 1988, he hit .285/.313/.407 as Gary Carter's primary backup and played in the 1988 NLCS. In 1989, he hit .291/.316/.407, and in 1990, he hit .307/.344/.426 as the primary starter. He did not have a lot of power, he did not draw a lot of walks, and he did not steal bases. But "Mackey the Hacker" (as the Mets broadcasters often referred to him) was a slashing line-drive hitter. He did play catcher and several other positions and his OPS+ was at 110 or 111 ever year, very good for a catcher and excellent for a backup catcher. In 1989, he took some criticism from fans when Carter was injured as he could not measure up to the Hall-of-Fame player's incredibly high standards; most teams would have appreciated such an effective hitter as their backup catcher.

Sasser lost his starting catching job in 1991 due to a psychological problem. He kept double- and triple- pumping when trying to throw the ball back to the pitcher, showing a mental block in getting the ball back to the mound. Oddly, he had no problem when it came to throwing the ball to second base to try to nab base-thieves. This problem led to his being moved from behind the plate, likely cutting short his major league opportunities.

He later became the baseball coach at Wallace Community College in 1998 and athletic director in 2011-2012.