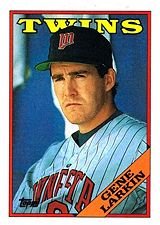 Gene Larkin played seven seasons with the Minnesota Twins and is best remembered for his contributions to the 1991 World Series-winning club.

Larkin attended Columbia University, where he hit .429 with 19 home runs in his senior year. He was then selected by the Twins in the 20th round of the 1984 amateur draft and was signed by scout Herb Stein. Selected just six picks after Larkin was a young high school pitcher named Jack McDowell, who would refuse to sign instead going to Stanford University where he would become a 1st round pick three years later on his way to over 120 career wins.

Larkin quickly advanced through the Twins' system, hitting over .300 at ever minor league level, and reached the majors during the 1987 season. He saw regular playing time, mostly as designated hitter, during his first four big league seasons, and was remarkably consistent at the plate, hitting between .266 and .269 in each of those four years.

Larkin saw less playing time in 1991 but hit a career-best .286. In Game 7 of that fall's World Series, he hit a walk-off single in the 10th inning, scoring Dan Gladden and giving the Twins a championship against the Atlanta Braves.