LECOM Park in Bradenton, FL, is the home of the Bradenton Marauders, the Pittsburgh Pirates' Low-A Florida State League farm team, and Pirates' spring training games. Baseball has been played on this land since City Park opened in 1923, and the Marauders and Pirates are readying a centennial celebration.

During World War II, with most of professional baseball including the Florida State League shut down and parent teams holding spring training closer to home, the U.S. Army used the original ballpark as a training base.

City Park, re-named Ninth Street Park in 1927 and Braves Field in 1948, changed monikers again in 1962 to honor Pirates great and Bradenton retiree "Deacon" Bill McKechnie as he joined the Hall of Fame. In 1969, four years after his death, the Bucs moved spring training there.

While its age built nostalgia into its mystique, it was never a player favorite: Pirates great Dave Parker said of his 1974-1983 spring-training home, "Playing in the outfield was like playing in a potato patch"; Whitey Herzog, who managed the Kansas City Royals most of those years, famously called it "the closest thing to a cow pasture I've seen."[1]

It was one of five Florida ballparks that then or previously hosted affiliated or spring-training baseball to appear in the HBO film Long Gone (1987).[2] The others were Henley Field and Joker Marchant Stadium in Lakeland, Plant Field at the University of Tampa, and Jack Russell Stadium in Clearwater.

McKechnie was essentially rebuilt before the 1993 season: a new grandstand and facade, capacity more than triple the original's, a new architectural style - Spanish Mission - and a timeline that had workers still putting numbers on the new seats during opening ceremonies before its March 5 debut game.

The facility was quite the laggard when it comes to lights, which did not go up for 20 years after Wrigley Field famously abandoned day-only baseball in 1988. The Pirate organization actually favored a day-based schedule, and what finally carried the day was an unrelated issue - the migration of big-league springtime baseball to Arizona. The state of Florida set up a grant program, which in 2008 funded a $15 million renovation of McKechnie that included lights.[3]. The inability to play night games was a primary reason the site had not had a full-season minor league team since the third season of the original playpen.

Subsequent renovations have improved it even more. The most thorough, during the 2012-2013 off-season, brought today's playpen's capacity to more than quadruple the original's - 8,500 versus 2,000.

Lake Erie College of Osteopathic Medicine bought 15 years' worth of naming rights in 2017. The college's main campus is, as might be expected, near Lake Erie - in Erie, PA. However, LECOM is therefore not far from Pittsburgh and the college has two regional campuses in Florida, so the name is not as incongruous as it may first seem.

With Ed Smith Stadium in Sarasota, LECOM was to co-host the 2021 U-18 World Cup - but the Coronavirus pandemic postponed it to September 2022, when it was finally played on the revised schedule. 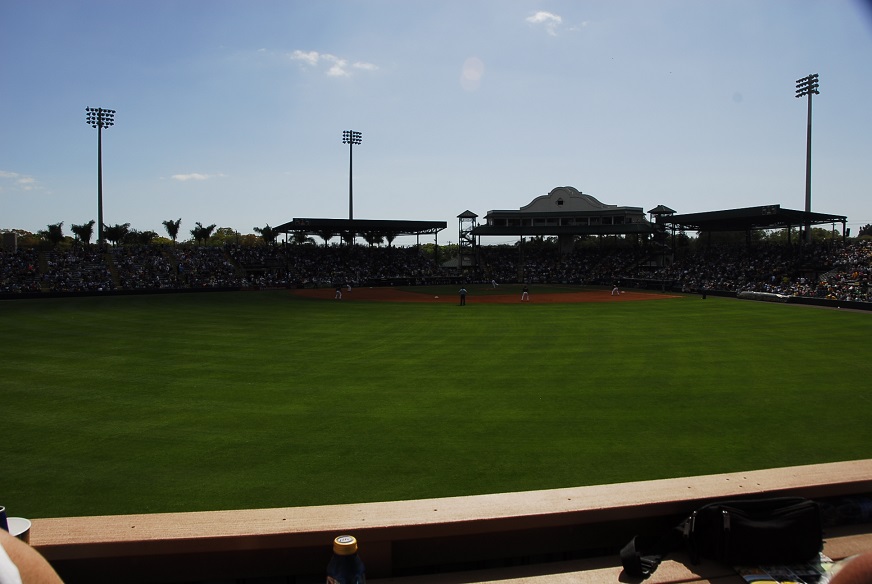