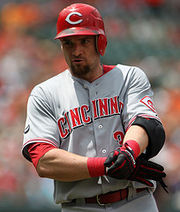 Jonny Gomes was drafted by the Tampa Bay Devil Rays in the 18th round of the 2001 amateur draft. He was signed by scout Hank King and made his pro debut that summer. He had some great seasons in the minor leagues, starting off by hitting .291 with 18 homers and 44 RBI in 62 games for the Princeton Devil Rays in 2001, when he was named the Appalachian League MVP. With the Bakersfield Blaze of the California League in 2002, he hit .278 with 30 homers and 72 RBI, scoring 102 runs after also drawing 91 walks. By the end of 2003, he was making his big league debut for the Devil rays. He had started that season with the AA Orlando Rays, hitting .249 with 28 doubles and 17 homers in 120 games, and also played 5 games at AAA, where he hit .316 with 3 extra-base hits. In his first taste of the major leagues, Jonny went 2 for 15.

Gomes spent a full season in AAA in 2004, with the Durham Bulls of the International League. He played 114 games, hit .256/.368/.531 and slugged 27 doubles and 26 homers. In spite of his relatively low batting averages, he was much liked by prospect watchers because of his ability to draw walks combined with outstanding power at a young age. However, he found it tough to break into the last-place Tampa Bay's line-up. He only had 14 at-bats in the big leagues that season, getting one hit, and in 2005, he was losing playing time to other young outfielders such as Aubrey Huff, Carl Crawford and Joey Gathright. The fact that he was not a particularly good defensive outfielder really hurt his chances against competitors who seemed to have better all-around skills. Still, he hit .282 in 101 games, being mainly used as a DH, and slugged 21 homers as a 24-year-old rookie. He seemed to have a bright future ahead of him, but he had a very poor season at exactly the wrong time in 2006, falling to .216 in 117 games. He still had the good power though, with 21 doubles and 20 homers, and continued to draw walks, so he was far from useless, but he was no longer considered a budding star after that. In 2007, he improved to .244 with 20 doubles and 17 homers in 107 games, bringing his OPS+ back over 100.

In 2008, the re-named Tampa Bay Rays suddenly became good, buts Gomes was cast aside as a result. His batting average fell all the way below the Mendoza Line, to .182, and he was limited to 177 at-bats in 77 games. The Rays had young talent falling out of their ears, with Crawford, B.J. Upton, Gabe Gross, Willy Aybar and the veteran Cliff Floyd all vying for playing time in the outfield and at DH, and Gomes became an afterthought. He was sent down to the minors in early August, then did not play at all in the postseason, when the Rays reached the World Series for the first time in team history. After the season, he moved to the Cincinnati Reds as a free agent.

Gomes began the 2009 season with the International League's Louisville Bats, the AAA affiliate of the Reds, where he hit .282 with 10 doubles and 9 homers in 37 games. He showed tremendous power after being called up to Cincinnati, belting 17 doubles and 20 home runs in only 281 at bats while splitting time between left field and right field. He had the busiest season of his career in 2010, playing 148 games as the Reds' regular left fielder, hitting .266 with 18 homers and 66 RBIs. He started 2011 with the Reds, but was sent to the Washington Nationals for a pair of minor leaguers at the trading deadline. He was hitting only .211 with 11 homers in 77 games for the Reds, but did even worse for the Nats, with a .204 batting average, 3 homers and 12 RBI in 43 games.

Gomes signed as a free agent with the Oakland Athletics before the 2012 season and made a very nice comeback. Splitting time between left field and the DH slot, he hit .262/.377/.491 in 99 games, slugging 18 homers and collecting 47 RBI. His OPS+ was an excellent 140 and he made a significant contribution to the A's winning a completely unexpected division title, passing the Texas Rangers in the season's last days. However, he only went to bat once in the postseason, making an out as a pinch hitter in Game 5 of the ALDS against the Detroit Tigers. After the season, he cashed in on his success, signing a two-year deal with the Boston Red Sox for a total of $10 million. However, after the Red Sox had a dreadful first half in 2014 that saw them fall to the bottom of the AL East standings, plans changed and on July 31st, he was traded back to the A's, along with P Jon Lester, in return for OF Yoenis Cespedes. He was hitting .234 with 6 homers and 32 RBIs at the time and had lost his starting job; during his relatively brief time with Boston, he had managed to hit 6 pinch-hit homers, second most in franchise history behind Ted Williams. With Oakland, he hit .234 in 34 games, getting only 64 at-bats. He played the last couple of innings of the Wild Card Game against the Kansas City Royals in left field, but did not get to bat.

Gomes signed as a free agent with the Atlanta Braves before the 2015 season and was the team's most used left fielder, even if he only started 47 games at the position, as no one came forward to claim the job full-time. He hit .223 in 193 at-bats, with 7 homers and 22 RBIs. His most memorable performance came on the mound however, as he made his professional pitching debut on August 28th in a 15-4 beatdown at the hands of the New York Yankees. In his inning on the mound, he gave up a lead-off homer to Chris Young and then back-to-back doubles to John Ryan Murphy and Brett Gardner to give up a second run, but managed to strike out his opposite number, Bryan Mitchell, after a long battle to end the frame. Three days later, on August 31st, he was traded to the Kansas City Royals in return for minor league SS Luis Valenzuela, joining his seventh team since 2011 (with Oakland being counted twice). He played 12 games for the Royals, hitting .167, in what were his final major league games.

Gomes became a hitting coach with the AZL Diamondbacks in 2018. From 2019-2022 he served as the Arizona Diamondbacks minor league outfield and baserunning coordinator.

His brother Joey Gomes played in the minor leagues and then became a private batting instructor, mentoring future top draft picks such as Spencer Torkelson.