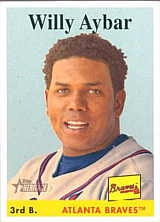 Willie Aybar played in the majors from 2005 to 2010. He missed the 2007 season with a variety of problems, ranging from alcohol abuse to wrist surgery. He was arrested on several occasions for assaulting his wife, most recently in 2011. His inability to conquer his love of drink coupled with his issues with anger led to his big league departure before the age of 28.

Aybar was signed by scout Felix Feliz for the Los Angeles Dodgers in January 2000. He made his pro debut that summer for the Great Falls Dodgers. He was a backup to David Ortiz for the Dominican national team in the 2009 World Baseball Classic. He was 2 for 4 with a walk and a double as the team's top offensive performer. He made two crucial defensive gaffes in the make-or-break loss to the Dutch national team. With a 1-1 game and one out in the 11th, he failed to catch a pick-off throw from Carlos Marmol that let Eugène Kingsale move from first to third (Marmol was charged with an error). Yurendell de Caster then grounded to Aybar, who made a game-ending error that eliminated the Dominicans from the tournament.

He is the older brother of Erick Aybar and uncle of all three brothers known as Wander Franco: Wander Javier Franco, Wander Alexander Franco and Wander Samuel Franco.