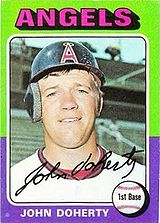 Doherty was born in Woburn, MA, one of five major leaguers to be born there through 2010. He attended Reading High School and was drafted in January, 1970 by the Angels.

Doherty made his major league debut on June 1, 1974 and got into 74 games with the Angels that year. Although it was a team which lost 94 games, it had some big names: Frank Robinson, Mickey Rivers, Nolan Ryan, Frank Tanana and Bill Singer. The manager for the second half of the season was Dick Williams. John hit .256 on a team which hit 254, and he slugged .368 on a team which slugged .356. Given that he was the youngest regular (Dave Chalk was a year older), it was a pretty good performance. Doherty lost his job the following year to Bruce Bochte, who hit .285 while Doherty hit .202.

He continued to play in the minors through 1978. After his playing days he was a batting instructor in the Boston Red Sox organization.

He is not to be confused with pitcher John Doherty or with Jack Daugherty.