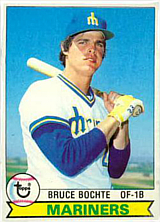 “I don’t take it all so seriously now... I’m just as intense from the start of a game to the finish, but I’m no longer caught up in that thinking that the whole community knows... and cares... what you’re doing.” - Bruce Bochte, to the LA Times, April 25, 1985

First baseman/outfielder Bruce Bochte was selected by the California Angels in the second round of the 1972 amateur draft. During his collegiate career at Santa Clara, he was MVP of the 1971 National Baseball Congress World Series while playing for the Anchorage Glacier Pilots who won the championship. In his three seasons in the minor leagues he never hit below .319.

Bruce reached the majors with the Angels in 1974 and was the team's Opening Day first baseman the following year, hitting a team-high .285 in his first full big league season. After a stint with the Cleveland Indians, Bochte signed with the Seattle Mariners following the 1977 campaign. He hit .316/.385/.493 with 16 bombs and 100 RBI and appeared in the All-Star Game in 1979, leading the Mariners in batting average in three of his five seasons with the club. Bochte abruptly retired following the 1982 season but returned with the Oakland Athletics in 1984. He spent three years as the A's regular first baseman and hit .295 with 14 home runs in 1985.

During his playing days, Bochte took a great interest in environmental issues, and after his baseball career ended, he spent time working for the Center for the Story of the Universe in San Francisco, where he studied cosmology.