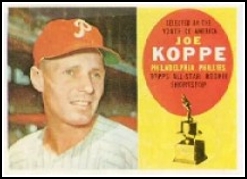 In 1949, for the 18-year-old Joe Koppe the class B Big State League Greenville Majors was the first stop in a long trip to the major leagues. It took ten years, seven leagues and seven teams before he got his chance.

On September 3, 1955 the Milwaukee Braves purchased Joe from the AA Texas League Shreveport Sports. It was late-season 1958 when the Braves called him up and he got his first look at major league competition. He was a 27-year-old rookie shortstop who appeared in 16 games, had 9 at bats with 4 hits for a .444 batting average.

On March 31, 1959 Joe was traded by the Milwaukee club, along with Gene Conley and Harry Hanebrink, to the Philadelphia Phillies for Johnny O'Brien, Ted Kazanski and Stan Lopata. He spent his first full season in the majors, with the Phillies that year, getting in 126 games and hitting for a .261 average. He was at the shortstop spot 113 games and second base for 11. He fielded at a .954 clip. Koppe had another full season with the Phillies in 1960, got into 58 games, hit .171 and fielded .966.

Koppe started the 1961 season with the Phillies but on May 4th, he was traded along with Turk Farrell to the Los Angeles Dodgers for Don Demeter and Charley Smith. On May 16th, the Dodgers traded him to the St. Louis Cardinals for Duke Carmel. On June 19th of the same year, the expansion Los Angeles Angels purchased him from the Cardinals for $1,000. While all these transactions were taking place, Joe played in the Pacific Coast League with the Spokane Indians and the Portland Beavers for a combined total of 30 games. The infielder then finished out the year with the Angels, appearing in 91 games, hitting .251 and fielding .947.

1965 was to be his last year in pro baseball. He appeared in 23 games for the California Angels, as they became known that year, and also spent time with the PCL Seattle Angels, playing in 63 contests with a .262 batting average and fielding at a .966 mark.