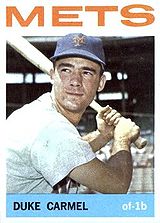 Duke Carmel, a big left-handed swinging first baseman/outfielder, was signed as an amateur free agent by the St. Louis Cardinals shortly before the 1955 season. The 18-year-old started his career with the Albany Cardinals in the Class D Georgia-Florida League, where he appeared in 24 games and hit .292. Duke was with six different minor league clubs before appearing in 10 games with the Cardinals in 1959. In 1960, he was at Sportsman's Park for a four-game appearance. He had a two-year stint in AAA ball and came back to St. Louis in 1963 where he appeared in his longest big league stint, 57 games, hitting only .227.

With his name, he might have been a natural for having a candy bar named after himself. But he probably would have had a better chance had he put up numbers in the majors like the .324 batting average, 29 homers and 121 RBI he had in 1957, when he led the Billings Mustangs to the Pioneer League pennant, or the 35 home runs he hit for Buffalo in 1964.

After baseball, Duke became a salesman for a liquor distributor and made his home in Coram, NY. There was some question about his date and place of death in 2021, as he was a resident of Waretown, NJ but died on the road, either in New Orleans, LA, as originally reported, or somewhere in the Carolinas. His son eventually confirmed the details of his passing.