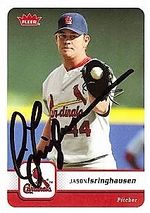 Isringhausen was a member of the New York Mets' highly touted, but ultimately disappointing, "Generation K", with Paul Wilson and Bill Pulsipher. Isringhausen struggled as a starter with the Mets before being traded to the Oakland Athletics with Greg McMichael for reliever Billy Taylor in 1999. With Oakland he found success as a closer. As a free agent he moved on to the St. Louis Cardinals in 2002, helping the Cardinals to the 2004 World Series. In 2004, Isringhausen tied Lee Smith's Cardinals team record for saves in a season with 47, while leading the National League in that category. Isringhausen went on to win a World Series ring with the Cardinals in 2006, despite not playing in the postseason due to injury. Young Adam Wainwright replaced him as closer for the push to the title.

After struggling in 2008 Isringhausen went on to pitch for the Tampa Bay Rays in 2009. Injuries limited him to only 19 games, with only 9 of those coming at the big league level. After pitching for the Cincinnati Reds AAA team, the Louisville Riverbats, in 2010 Isringhausen returned to the Mets for the 2011 season. Working out of the bullpen he put up a 4.05 ERA in 53 games while picking up 7 saves. In 2012, Isringhausen ended his career pitching for the Los Angeles Angels of Anaheim, putting up a similar mark of 4.14 ERA in 50 games. After the season he retired and joined the coaching staff of Southern Illinois University Edwardsville.

He had his career stalled early with a case of tuberculosis. He first became eligible for the Hall of Fame in its 2018 election, although he did not receive a single vote.