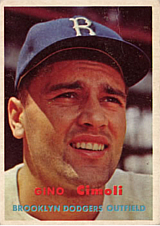 With one of baseball's catchiest names, Gino Cimoli was an All-Star in his first full season in the majors and the first man to come to the plate in a West Coast game.

Born in San Francisco in 1929, Cimoli was signed by the Brooklyn Dodgers in 1949. Before reaching the majors, he was with the Montreal Royals from 1949 to 1952 and again in 1954 and 1955. He also played for the Fort Worth Cats and St. Paul Saints in the minors. Gino's first shot with Brooklyn was in 1956, at 26, when he was primarily used as a defensive replacement. He appeared in 73 games and had 36 at-bats, hitting .111. He appeared just once in that fall's World Series, as a defensive replacement for Sandy Amoros, ironic considering Amoros' all-time defensive gem in the Fall Classic one year prior. In 1957, Gino became a regular outfielder, alongside Duke Snider and Carl Furillo. In the season opener against the Philadelphia Phillies, he hit a game-winning homer off Robin Roberts in the 12th inning. On the year, he hit .293/.343/.410 with 10 home runs and scored 88 runs. He was named to the All-Star team for the only time in his career, striking out in his only at bat.

The Dodgers and Cimoli moved to L.A. in 1958, and Gino was the leadoff batter on Opening Day against the San Francisco Giants at Seals Stadium. The first batter in a West Coast big league game, he struck out against Ruben Gomez. That summer, he hit .246/.292/.366 with 9 homers in 109 games. After the season, he was dealt to the St. Louis Cardinals in the Wally Moon trade (missing out on a Dodgers World Series win the following year). Gino was a regular outfielder for the Cardinals in 1959, on a team that finished seventh in the National League. He hit .279/.327/.430 with 40 doubles and 7 triples, both in the top ten in the league. The Cardinals were willing to trade him, and so he found himself with the [[Pittsburgh Pirates] in 1960.

Cimoli was an integral part of the World Champion Pirates. The Pirates intended for him to fill be their fourth outfielder behind Bob Skinner, Bill Virdon, and Roberto Clemente. He was good defensively and had the speed to cover center field. When starting center fielder Bill Virdon slumped early in the season, Cimoli got a chance to platoon and provided good offense as well as defense. The platoon lasted until early August, when Cimoli temporarily moved to right field to replace an injured Roberto Clemente. By the time of Clemente’s injury on August 5th, Virdon had started 55 games in center and Cimoli had started 46 while also starting several games in right field. Cimoli was hitting .288 on August 7, but then slumped while Virdon went on a hot streak. With Virdon now hitting well, manager Danny Murtaugh handed the center field job to Virdon on a regular basis after Clemente returned, Cimoli starting only 8 more games. Gino was slated to fill a reserve role in the World Series, but left fielder Bob Skinner injured his thumb in the opening game. Cimoli entered as a defensive replacement in the 8th inning. With Skinner still unable to play, Cimoli played every inning of Games 2 through 6, batting fifth. When Skinner returned for Game 7, Cimoli returned to the bench. With the Pirates trailing the New York Yankees, 7-4, in the bottom of the 8th, Cimoli led off as a pinch-hitter for reliever Roy Face, belting a single to right field against Yankee reliever Bobby Shantz. The hit was the beginning of a dramatic five-run rally that temporarily gave the Pirates a 9-7 lead in a game ultimately won, 10-9, on Bill Mazeroski's walk-off home run. In the Series, Cimoli batted .250 (5-for-20) and tied Mazeroski for most runs scored by a Pirate (4).

Cimoli, Gene Baker, and Don Hoak shared an interest in greyhound racing. After baseball, Cimoli lived in San Francisco and was active in the San Francisco Italian Athletic Club. He died in 2011 at age 81.