The 1957 Brooklyn Dodgers were the last edition of the Dodgers to play in Brooklyn. They were fifth in the National League in attendance, but the New York Giants were last, so off to California both went. Both teams' attendance was affected by the fact that, by the end of May, it became clear that the two teams would be leaving for the West Coast after the season. The Dodgers would play the 1958 season in Los Angeles and the Giants in San Francisco. 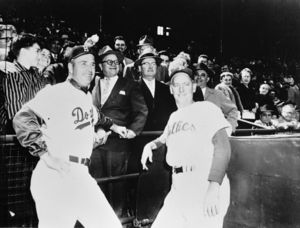 The Dodgers played several "home" games in Jersey City's Roosevelt Stadium in 1957, with decent attendance. They hung on in the pennant race until the beginning of August, when they were handed an opportunity to break away from the pack by playing 11 straight games against two of the league's bottom feeders, the Giants and Pittsburgh Pirates. They lost 7 of those 11 games however, and by the end of that stretch were 8 1/2 games behind the Milwaukee Braves. The Dodgers were never a factor in the pennant race after that, and played their last home games before sparse and demoralized crowds. 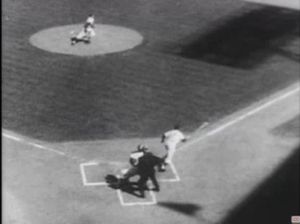 Several career milestones were reached by longtime Dodgers. Gil Hodges scored his 1000th run and knocked in his 1000th RBI. Duke Snider reached both of those milestones in 1957, and he also hit his 300th home run as he posted his fourth consecutive season of 40 or more home runs. Right fielder Carl Furillo hit .306, and left fielder Gino Cimoli hit .293 with middling power. But some of the team's old stalwarts were beginning to show their age: Pee Wee Reese hit .244 with only 5 extra base hits in 103 games, while Roy Campanella hit .242 with only 9 doubles and 13 home runs in what proved to be his last season - he would be left paralyzed by an automobile accident in the off-season. Junior Gilliam also had an off-year, putting up an atypically weak line of .250/.323/.314, but he, at least, would bounce back.

Johnny Podres won the league's ERA title (2.66). He also posted the most shutouts (6), and the lowest WHIP, to go along with a 12-9 record. Don Newcombe posted the league's lowest BB/9 ratio, but only went 10-11, one year after winning the inaugural Cy Young Award in 1956. 20-year-old Don Drysdale emerged as a future ace, however, with a record of 17-9, while his 2.69 ERA was only fractions behind his teammate Podres. Clem Labine was the saves leader with 17. A couple of other promising youngsters were on the staff: the 21-year old Sandy Koufax was 5-4, 3.88, but still struck out 122 batters in 104 innings, while 24-year-old Danny McDevitt was 7-4, 3.25 as a rookie. On the downside, Roger Craig had an off year, ending with a 6-9 record and a bloated 4.61 ERA after pitching well in his first two seasons with the Dodgers. Another disappointment was veteran Sal Maglie, who had pitched brilliantly down the stretch in 1956: he went 6-6 in 19 games (but with a solid ERA) before being traded to the New York Yankees in August.