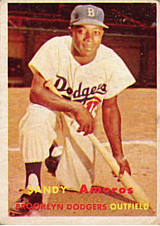 "Sandy was a terrific little guy. Very quiet and very shy, always a smile on his face." - Don Drysdale

Sandy Amorós is best remembered for the fantastic catch he made in Game 7 of the 1955 World Series. Entering in the 6th inning as a defensive replacement in left field, the left-hander sprinted and reached to catch Yogi Berra's slicing line drive near the left field foul line, turning a sure extra base hit into a double play and preserving the Brooklyn Dodgers' 2-0 lead. An overall good hitter with a keen eye, these skills were still not enough to help him crack the Dodgers lineup; not with Carl Furillo and The Duke entrenched in two of the three outfield positions. Thus, Sandy split most of his prime platooning or entering late for defense. Amoros hit over .300 during his 7-year minor-league career with an on-base-percentage well over .400.

In the 1950 Central American and Caribbean Games, Amorós led Cuba to a Gold Medal with 6 home runs in 7 games. He then turned pro. Prior to reaching the majors, Amorós played for the New York Cubans in the Negro Leagues in 1950 and in the Dominican Republic during the summer of 1951. Sandy played 11 winters in his native Cuba, where he was Rookie of the Year in 1950-51.

His playing career ended in Mexico in 1962. Back in Cuba, Fidel Castro made life very difficult for Sandy because he did not wish to manage a team in the summer league Castro was forming. Only in 1967 was Amorós able to leave Cuba and move to the United States, first to New York City and later to Florida. He lived in poverty for many years and lost a leg to diabetes in 1987. He died of pneumonia in 1992 at age 62.