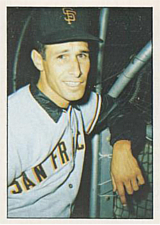 “I know so little about the American League that I’m not even sure Tom Yawkey is still alive and owns the Red Sox... I have never even seen Fenway Park, but I have certainly heard a lot about it. I’m strictly a right-handed pull hitter so maybe I can do some damage with that short left field wall.” - Eddie Bressoud, after being dealt to the Red Sox, November 1961

Before the 1950 season, shortstop Eddie Bressoud signed with the New York Giants. The 18-year-old infielder was sent to the Springfield Giants of the Ohio-Indiana League where he appeared in 70 games and hit .240. He spent the next two seasons with the Sioux City Soos, where he appeared in a combined 304 games and hit .242, before the United States Military took charge of his services during 1953 and 1954. After his military obligation was over, he came back to the AAA Minneapolis Millers in 1955, played 145 games and hit .251.

1956 saw Eddie's first look at the major league level when the Giants called him up in June. Bressoud appeared in 49 games at shortstop, fielding .950 and hitting .227. He was sent back to Minneapolis for the remainder of 1956 and the start of 1957. He was called up again to the Giants and stayed until becoming the first selection by the Houston Colt .45's in the 1961 expansion draft. He was traded to the Boston Red Sox for shortstop Don Buddin before appearing in a game for the Colts. He had never really received a real chance to be a starter with the Giants, as his high in games played in his six years was 116.

Bressoud was with the Red Sox, where he carried a .264 average and .965 fielding percentage, from 1962 through 1965. Eddie adapted his swing to the Green Monster at Fenway Park and showed an increase in power with 20 homers in 1963. He hit a career-high .293 in 1964, the year he was named to the All-Star team. On November 30, 1965, the Red Sox traded him to the New York Mets for Joe Christopher. Bressoud played every position in the infield in New York in 1966, appearing in 133 games, hitting .225 and fielding .964. On April 1, 1967 the Mets traded him, along with Danny Napoleon and cash, to the St. Louis Cardinals for Jerry Buchek, Art Mahaffey and Tony Martinez.

A .252 lifetime hitter, he wound down his big league career as a backup infielder for the 1967 world champion St. Louis Cardinals, with his last action being two brief appearances in the 1967 World Series against his former team, the Boston Red Sox. The Cardinals had light-hitting Dal Maxvill as their starting shortstop, and Eddie often came into the game to replace him when he had been pinch-hit for.

Bressoud, who went on to graduate from UCLA, managed the 1969 San Jose Bees in the California League in the California Angels organization before becoming a physical education teacher and the baseball coach at De Anza College in Cupertino, CA.