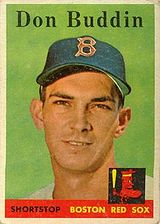 “You’re going to like that little Buddin. He’s a peppery kid who is a battler down to the last pitch.” - Pinky Higgins, to Tom Yawkey, 1954.

"[In the 1970s] there still was a piece of graffiti in the men's room at the Dugout, a Commonwealth Avenue bar, that read 'Don Buddin lives! There is a little bit of him in all of us.'" - Leigh Montville, from his book about Ted Williams, p. 196.

A High School All-American in football, Don Buddin turned down scholarship offers from South Carolina and Clemson to sign as an amateur free agent with the Boston Red Sox before the 1952 season. The 18-year-old shortstop was sent to the Class B Roanoke Ro-Sox, where he played 69 games and hit .252. He hit .300 for the Greensboro Patriots while leading the Carolina League in RBIs with 123 in 1953, then helped lead the Louisville Colonels to the Little World Series in 1955.

Buddin became the everyday shortstop for the Red Sox in 1956. He was often the target of vitriol from the Fenway faithful, with his .241 career average and erratic defensive play. It was all cheering on July 11, 1959, when his 10th-inning grand slam home run gave the Sawx an 8-4 win over the New York Yankees. He played with Boston until they traded him to the Houston Colt .45's for Eddie Bressoud on November 26, 1961, playing with Houston and the Detroit Tigers in 1962 as a bit player, his final year in the majors. He spent three more seasons in AAA ball, finishing his baseball career with the Knoxville Smokies in 1965. He spent 13 active seasons in baseball from 1952 through 1965, serving a tour of duty in Korea in 1957.

Buddin attended Wofford College in South Carolina in the offseason. He managed a liquor store, sold insurance and was general manager of a local newspaper before his passing in 2011.