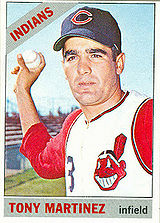 Tony Martinez was the opening day starting shortstop for the Cleveland Indians in 1963 following a breakout season in the minors, having captured the International League Most Valuable Player award in 1962 while playing for the Jacksonville Suns. He replaced previous starter Woodie Held, who moved over to man second base for the Indians. Martinez appeared in the team's first 35 games but hit just .167 with 4 extra-base hits over that span, forcing his demotion back to AAA. He appeared in small parts of three more seasons for the Indians, wrapping up his major league career in 1966. Martinez's final stat line in the majors included batting .171 over 73 games.