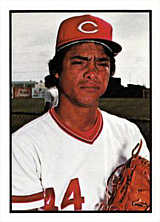 Capilla was born January 7, 1952 in Honolulu, Hawaii. He attended Westmont High School, near San Jose, in California. In the June 1970 draft, he was picked in the 25th round by the San Francisco Giants. His first pro season was a testament of how raw he was out of high school. With the Great Falls Giants, in the Pioneer League, he struck out 69 in 38 innings but allowed 57 walks and uncorked 12 wild pitches. His ERA was 6.63 and his record 2-5 in 17 games, including 5 starts. Capilla did not play in 1971 and was back in 1972 with the Decatur Commodores in the Midwest League. He was second in the league with 192 strikeouts in 161 innings, but again showed some wildness, leading the league with 125 walks and 25 wild pitches. In 25 games (and a relief outing), his record was 6-12 with a 4.70 ERA. He remained in A ball in 1973 with the Fresno Giants in the California League, where he made 13 starts in 24 games. His ERA was 4.40 in 86 innings, striking out 112 and walking 74.

After the season, he was picked in the Double A phase of the 1973 Rule V Draft by the Arkansas Travelers of the St. Louis Cardinals chain, who liked both his power and the fact that he was a lefty. The Cards moved him to Double A in 1974 and the Texas League. His control struggles continued. He made 18 starts (in 20 games) and walked 84 in 88 games while striking out 78, the first time he did not fan at least a batter per inning. He was also hit harder than usual, with 87 hits, this perfect storm of wildness and being bombed good for a 6.14 ERA. He began 1975 back with Arkansas but, after struggling in the first two months, was sent down to the St. Petersburg Cardinals in the Florida State League. He made 8 starts, where his ERA was 2.12 in 51 innings, with 2 complete games and a 3-4 record. He was back with Arkansas in August, where his final ERA was 4.61 in 80 innings. In 1976, he was used strictly as a reliever in his first year in Triple A with the Tulsa Oilers in the American Association. In 49 games, his record was 4-4 with one save and a 4.89 ERA, striking out 58 but walking 45 in 57 innings.

In September, he was called up by the Cards. In his very first game, he allowed a game-tying run against the New York Mets in the top of the 8th inning at Busch Stadium. But the Cards took the lead on a double by Garry Templeton and Capilla was the winning pitcher. It was the only time he was used in a meaningful game that month, allowing 5 runs in 8 1/3 innings. Capilla was among the last cuts by the Cards in spring training 1977. He was sent to the New Orleans Pelicans in the American Association and called up for a week in May, when he allowed 4 runs in 2 games covering 2 1/3 innings. In June, he was traded to the Cincinnati Reds for reliever Rawly Eastwick. Capilla spent the rest of the season with the Reds, mostly as a member of the starting rotation. He made 16 starts in 22 games and his record was 7-8 with a 4.23 ERA, allowing 94 hits in 106 1/3 innings, the second best ratio on the team. In 1978, Capilla barely made the team out of spring training due to some control issues. He made 3 starts in April but failed to pitch more than 3 innings each time, getting bombed for a 9.45 ERA but only an 0-1 record. In May, he was sent to the Indianapolis Indians in the American Association where he remained the rest of the season. Despite going 10-6 in Triple A, he struggled with a 5.45 ERA in 22 starts, covering 132 innings. He struck out only 87, his days as a strikeout specialist now over.

He was back with Cincinnati when the 1979 season began but, in May, he was traded to the Chicago Cubs for a player to be named later. The transaction was completed after the season when switch-hitting outfielder (and future United States ambassador) Mark Gilbert was sent to the Reds. The Cubs sent Capilla to the Wichita Aeros in the American Association, where he made 28 appearances, including 9 starts. In 83 innings, his ERA was 4.55, better than the team's 4.86. The Cubs called him back in August and he was very effective the rest of the season. In 13 games (with a start), his ERA was 2.60, limiting opponents to a .206 batting average in 17 1/3 innings. Capilla spent the next two seasons with the Cubs at the major league level. In 1980, he had his best moments in the big leagues over the first 3 months, with an ERA of 1.61 at the end of June, a 2-0 record, and having allowed only 16 hits in 22 1/3 innings. In July, the Cubs tried him as a starter but Capilla lost five straight assignments. He could not regain his effectiveness after he was removed from the rotation, with an ERA of 5.89 in his last 16 games. Overall, his final record was 2-8 with a 4.12 ERA in 89 2/3 innings. He had another good start in 1981, although he was seldom used in meaningful situations. He allowed an earned run in only 4 of his first 26 appearances until the midseason strike in June. At that point, he had no decisions with a 2.25 ERA. His work not the same once play resumed and he was used only 5 times in September. His final ERA was 3.18 in 42 games (51 innings), winning his only decision. It was his last season in the big leagues.

After the '81 season, he was traded to the San Francisco Giants for another pitcher, Allen Ripley. In spring training 1982, Capilla not only failed to make the big league team but the Giants released him. He signed in May with the Montreal Expos organization and played with Wichita, plus 2 games with the Memphis Chicks in the Southern League. He struggled with a combined record of 2-3 with an ERA of 8.03 in 38 1/3 innings. He finished the season with the Edmonton Trappers in the Pacific Coast League, the top Chicago White Sox affiliate, where he made 21 appearances (with a start), going 4-3 with a 5.53 ERA in 55 1/3 innings. In 1989, Capilla played for the West Palm Beach Tropics and Bradenton Explorers of the Senior Professional Baseball Association.