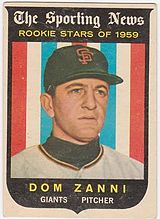 Dom Zanni , who grew up in the Bronx, NY tenements, put some ink on a New York Giants contract in 1951 and started on a seven-year journey to the Show. When he started on this trip he was headed for the Polo Grounds and when he arrived, the Giants had moved to San Francisco. There are plenty of reasons for the length of this trip, one being going 1-12 with a 7.39 ERA his first year out and then following it up with a 20-8 record with a 3.10 ERA just one year later. There were a lot of hamburgers and french fries on this ride along with 76 wins and 78 losses and a 4.10 ERA.

Dom picked up his first big league win beating Sam Jones and the St. Louis Cardinals at Seals Stadium in 1958. Zanni would be around the major leagues from 1958 to 1966, shuttling up and down from the minors. The hard-throwing right-hander wore the uniforms of the San Francisco Giants, Chicago White Sox and the Cincinnati Reds during his 9-6, 111-game ride in the bigs, spent mostly as a reliever.

After the 1961 season the Giants traded him to the White Sox in a deal that brought Billy Pierce and Don Larsen to San Francisco. In 1962, he had his best season going 6-5 with 5 saves in 44 appearances for Chicago. His greatest thrill was coming to Yankee Stadium and fanning Mickey Mantle, Roger Maris and Elston Howard, however his efforts went up in smoke when Turk Lown came in in the 10th inning and threw a first-pitch home run to Dale Long.

Early in the 1963 season Zanni was traded to the Reds for pitcher/author Jim Brosnan. Between 1964 and 1966 he commuted between Cincinnati and its farm teams. Dom pitched his last of 15 seasons (1951-1967) with the Buffalo Bisons of the International League, going 6-5 with a 2.67 ERA to end his minor league run at 140-122 record and a 3.46 ERA, which he thought wasn't too bad for a tired old pitcher whose warranty had run out.

One thing the right-hander always wanted known was that he had spent two seasons with the Sioux City Soos of the Western League and on June 5, 1954 had pitched a no-hitter, beating the Denver Bears, 3-0. His last out to get was none other than Earl Weaver who would gain fame as a Baltimore Orioles manager. In a 1994 interview Zanni recalled: "I'll never forget Weaver saying, 'just throw a strike, buddy, and that's the end of your no-hitter.' But he just popped it up to second. "That's Weaver for you. He would bother you for everything..."

Dom retired in Massapequa, NY, after 27 years in the insurance business, and died there in 2017.