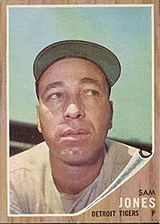 Sam Jones was an intimidating pitcher. He was big, threw hard, had a massive sweeping curveball, and could be quite wild. Three times he led the National League in both strikeouts and walks (1955, 1956, and 1958). He narrowly missed this feat a fourth time in his finest season, 1959, when he was the NL's Pitcher of the Year for the San Francisco Giants. Playing for the Chicago Cubs in 1955, Jones became the first African-American major leaguer to throw a no-hitter.

Jones was known as "Sad Sam" for his mournful expression (and in memory of an earlier Sad Sam Jones), and also "Toothpick Sam" because he was always chewing on a flat wooden toothpick. In a pro career that spanned 21 years (1947-1967), Jones got his start in the Negro Leagues in 1947 and 1948. He played in the semi-pro Southern Minnesota League in 1949 before signing with the Cleveland Indians, where he could not break into the starting rotation. He finally got a chance with the Chicago Cubs, who traded Ralph Kiner for him.

He also played winter ball in five Caribbean countries: Panama, Venezuela, Puerto Rico (where he won the Triple Crown of pitching in 1954-55), the Dominican Republic, and Nicaragua. His last four summers were spent as a player-coach in the minor leagues with the Columbus Jets.

Jones, who had been treated for neck cancer during the 1962 season, died of a recurrence of the disease in 1971.