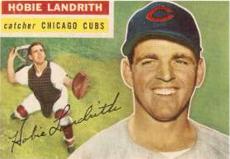 Hobie Landrith was one of seven brothers who had a monopoly on the catching position at their high school in Detroit, MI. The string of Landriths behind the plate was broken only once over several years by Harry Chiti, who would later become Hobie's teammate with the Chicago Cubs. The nineteen-year-old Hobie signed as an amateur free agent with the Cincinnati Reds before the 1949 season and play his first year of organized ball with the Charleston Senators of the class A Central League. He caught in 110 games and hit for a .250 average his first year out.

Landrith was with the Cincinnati Reds from 1950 through 1955 and then with the Chicago Cubs in 1956, when he caught a career-high 111 games but hit just .221. The St. Louis Cardinals had him in 1957 and 1958 and the San Francisco Giants used his talents for three years, 1959 to 1961. Hobie was the the New York Mets' first selection in the expansion draft when Casey Stengel reasoned that "you have to have catchers or you're going to have a lot of passed balls". That said, the Mets' decision to use their first pick on a career back-up catcher on the downside of his career was a first sign that their inaugural 1962 season would not necessarily be triumpahl. As an "original" Met he hit .289 in 23 games before being traded to the Baltimore Orioles for the most amazing Met of them all, "Marvelous" Marv Throneberry, but prior to his departure from New York, Hobie did connect for the game-winning home run in the Mets' first victory in franchise history.

Landrith finished out 1962 with the Orioles and started the 1963 season with them but was traded to the Washington Senators on May 8th. This was Hobie's last round-up as the 33-year-old catcher hit only .175 in 42 games. His 14-year major league career totals show that he appeared in 772 games behind the plate, fielding at a .983 percentage, and had a .233 career batting average with 34 home runs.

In Where Have You Gone, Vince DiMaggio? Edward Kiersh wrote of Hobie: "At every stop, he was a hitless wonder who became the manager's right-hand man, and he stayed in the majors fourteen years. After he retired, he spent 1964 as a coach for the Washington Senators, then used his charm and personality in public relations and later as director of sales for 45 Volkswagen dealerships in Northern California." Hobie Landrith now resides in Bloomfield Hills, MI, near Detroit.