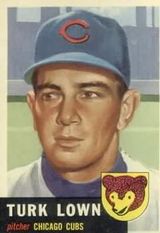 Turk Lown, who led the American League in saves in 1959 with the Chicago White Sox, spent almost his entire major league career with the Chicago teams, the Chicago Cubs and the White Sox. He got better as he got older, posting his best years after the age of 35. He was well known for his extremely high leg-kick prior to releasing the ball.

In the minors he played for Pueblo, and after his baseball career lived there. He also played for the Newport News Dodgers. He was with the minor-league Los Angeles Angels in 1954 and 1955 when he began to do relief work.

His name came from the fact that he earned little money playing in the minors, so he ate one big meal each day, choosing the biggest meal on the menu, which was usually turkey. He occasionally threw a "butterfly pitch".

After baseball, he was a postal carrier for 22 years.