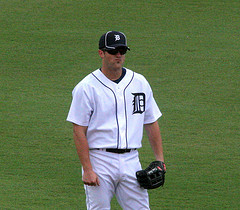 Danny Worth made his major league debut with the Detroit Tigers in 2010. On May 22, 2014 he became the first Tigers position player to take the mound in 51 years, retiring three of four Texas Rangers batters he faced (two by strikeout).

Worth hit .306 as a college freshmen, starting at shortstop for Pepperdine University and making second-team All-West Coast Conference. In 2006, the sophomore hit .310 with 24 doubles. He improved to .344 as a junior, finishing among the WCC leaders in average (6th), hits (83, 4th), doubles (19, 4th), total bases (115, 5th), steals (11, 8th) and slugging (.477, 10th). He was named the All-WCC shortstop. He finished with 59 career doubles, one shy of the Pepperdine record. The Tigers took him #91 overall (a second-rounder) in the 2007 amateur draft. He was the second Pepperdine player picked that year after Barry Enright. He was the only position player Detroit chose in the first five rounds; the next one was Cale Iorg in round six, another shortstop. He had been scouted by Tim McWilliam.

Worth made his pro debut with the Lakeland Tigers (.251/.325/.363 in 51 G), also going 6-for-14 with 2 doubles and a triple for the Erie SeaWolves. He batted .292 in the fall for the North Shore Honu. He just missed the top 10 in the Hawaii Winter League in average. Baseball America rated him the best defensive infielder and #8 prospect in the Tigers chain.

Worth started 2010 making apparent progress with Toledo - .274/.310/.356, 10 steals in 11 tries. He was then called up to replace fellow rookie Scott Sizemore on the Detroit infield on May 16th. In his MLB debut that day, Danny hit 9th and played second base. He singled off John Lackey in his first at-bat in The Show, finishing the game 1-for-3. He was 3-for-3 in his next game. He spent another short stint with the Mud Hens later in the year but was soon back with the Tigers again. Overall, he hit .255 with a pair of home runs and 8 RBI in 39 games in the majors that year.

Worth spent most of 2011 back in the minors, hitting .256 with 8 homers and 37 RBI for Toledo, and hit .270 over 30 games at the big league level. In 2012, he got into 43 games for Detroit, hitting .216 with no homers and 3 RBI. He got 22 starts at second base early in the season, but was sent back to the minors because of his lack of hitting. He hit .264 in 60 games at Toledo, but was on the Tigers' post-season roster and made a couple of appearances in that year's World Series. He took over for 2B Omar Infante when he suffered a broken wrist when hit by a pitch in the 9th inning of Game 4, but he only got to finish that game as the Tigers were swept in four games by the San Francisco Giants. 2013 saw him mostly at Toledo, with 86 games there, during which he hit .220. He also played 3 games with Detroit, going 0 for 2.

The Tigers suddenly found themselves with a shortage of infielders during spring training in 2014, when José Iglesias went down with hairline fractures in both shins, but Worth was not able to seize the opportunity as the team brass preferred to trade for Andrew Romine and Alex Gonzalez to start the year, while he went back again to Toledo. However, Gonzalez quickly proved that he was done as a major league player, so the Tigers called up Danny on April 20th. On May 22nd, he was forced to pitch after the Tigers had had to dig deep into their bullpen in two straight games; facing the Texas Rangers with a 9-2 deficit, he showed off a very good knuckleball in pitching a scoreless 9th inning in which he allowed a lead-off single to Chris Gimenez, but then struck out Michael Choice and Leonys Martin and got Luis Sardinas on a fly out. He was called upon again two days later, this time with the Tigers trailing the Rangers 11-2 in the 9th; he allowed a run in that inning, on back-to-back doubles by Rougned Odor and Michael Choice after two outs.