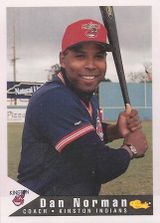 He was traded from the Cincinnati Reds to the New York Mets in 1977 in the Tom Seaver trade. Joe Torre was his manager in his four years with the Mets. He was part of a second blockbuster trade in 1981, when he went from New York to Montreal in the trade that sent Ellis Valentine to the Mets in return for Jeff Reardon.

In 1990, Norman played for the Florida Tropics of the Senior Professional Baseball Association. He played in 19 games and was batting .260 with 2 home runs and 10 RBIs when the league folded.