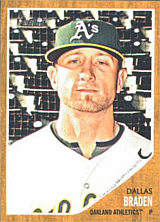 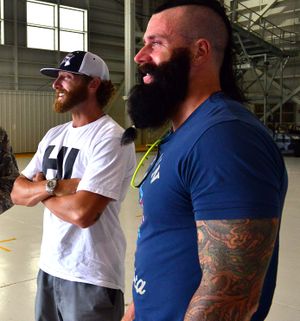 Pitcher Dallas Braden threw the 19th perfect game in major league history on May 9, 2010. His career was shortened by shoulder problems.

Braden was a bit of a troublemaker in high school in Stockton, CA, and was academically ineligible for two of his years there. His mother died of skin cancer in 2001, and he credits his grandmother, who raised him after his mother's death, for setting him straight by making him understand that if he did not mend his ways he would end up in jail. Braden heeded her advice and was twice All-Conference in junior college. Going on to Texas Tech, he was 6-4 with a 4.56 ERA as a junior. The Oakland Athletics chose him in the 24th round of the 2004 amateur draft. The left-hander was signed by scout Blake Davis and made his pro debut that year with the Vancouver Canadians (2-0, 2 saves, 2.33, 30 strikeouts in 16 1/3 innings) then was promoted to the Kane County Cougars, where he was 2-1 with a 4.70 ERA and 33 strikeouts in 23 innings. The Phoenix native split 2005 between the Stockton Ports (6-0, 2.68, 64 strikeouts in 44 innings, .201 opponent average) and Midland RockHounds (9-5, 3.90). He led A's farmhands in wins and was named the organization's minor league pitcher of the year. He tied Jason Scobie and Randy Leek for third in the affiliated minors in wins, one shy of the co-leaders. A shoulder injury caused Braden to miss the first three months of 2006. He returned to go 4-0 with a 4.10 ERA between three stops. To get some more action in, he pitched winter ball and had a 3-1, 1.34 record for the Indios de Mayaguez. Had he qualified, he would have been second in the Puerto Rican Winter League in ERA behind Bruce Chen.

Braden moved up the ranks in 2007, making up for his missed year. He was 1-0 with a 2.25 ERA for Midland and 2-3 with a 2.95 ERA for the Sacramento River Cats, giving up a .201 average and fanning 87 in 76 innings between the two stops. He fanned 17 Colorado Springs Sky Sox on August 27th during a three-hit shutout. Dallas had five separate call-ups to Oakland that year. He won his big league debut by allowing one run in six innings to the Baltimore Orioles on April 24, 2007 - the 10th A's rookie to make his MLB debut as a starting pitcher and get the victory - but was just 1-8 with a 6.72 ERA overall, finishing third-highest in Oakland annals in ERA for a hurler with 70+ innings with the fourth-worst winning percentage in Oakland history. Dallas bounced between the minors and majors again in 2008. Overall, he was 3-1 with a 2.36 ERA for Sacramento and 5-4 with a 4.14 ERA in the majors. His 7 pick-offs tied for third in the 2008 AL. He then spent all of 2009 in the majors. He started Opening Day and lost to the Los Angeles Angels. He was 8-9 with a 3.89 ERA in 2009 before his season ended a month early due to a rash that damaged his foot. He issued just 1.7 walks per 9 innings, the fourth-best rate in the 2009 AL.

It was presumed for all of several weeks in 2010 that he might become best known for a simmering feud with Alex Rodriguez over the latter's crossing the pitcher's mound to return to first base after a foul ball. Braden said that Rodriguez had broken an unwritten rule by stepping over the mound, while A-Rod replied that nobody knew of such a rule, and that Braden was only seeking his 15 minutes of fame by raising the matter. Then, on Mother's Day (May 9), with his grandmother in the stands, he tossed the 19th perfect game in Major League history, beating the Tampa Bay Rays 4-0; the Rays had the majors' best record and best offense coming into the game, making the achievement even more impressive, and reminding observers of the only other perfect game in Athletics history, tossed by a young Catfish Hunter on May 8, 1968. Braden finished the season with a record of 11-14 with a solid 3.50 ERA in 30 starts, but was overshadowed by the development of other young A's starters, particularly Trevor Cahill and Gio Gonzalez. His 2 shutouts tied for the American League lead. His perfect game was followed less than a month later by one tossed by Roy Halladay on May 29th, making it the first year since 1880 in which there were two perfect games in the majors. Less than a week later, on June 2nd, Armando Galarraga made a bid to make it three, but was deprived of a perfecto when umpire Jim Joyce missed an out call on what would have been the game's 27th and final out. Those two events overshadowed Braden's gem, which quickly became a footnote.

Dallas started the 2011 season well, putting up a 1-1 record and an ERA of 3.00 over his first three starts, but left the game on April 16th with shoulder stiffness. He did not return to the rotation, and indeed, two days after the first anniversary of his historic game, the A's announced that he would undergo surgery to repair a torn capsule in his left shoulder, taking him out for the season. The recovery rate from such surgery was not encouraging; it was performed by Dr. David Altchek, the New York Mets' medical director, but Braden was unable to come back. He had to have follow-up surgery and never returned to the mound at any level. When he announced his retirement in January 2014, he said of his pitching shoulder: "There is nothing left in there, it's just a shredded mess." There was no point attempting another surgery, but was quite philosophical about the outcome: "That's OK, I understood the odds I was facing. You have to face your mortality one day, and I have been so blessed in this game. If I take 10 minutes to be hacked off about it, it would be nine minutes too long. You can't ask for more than I've been given, coming where my grandmother and I are coming from."

In 2014, Braden became an in-studio analyst for Baseball Tonight on ESPN. He announced games for ESPN at the 2016 College World Series and moved into the booth for Monday Night Baseball on ESPN in 2016. He was laid off among the mass purge of ESPN employees in April 2017. That July, he joined the Oakland A's broadcast team with NBC Sports California.