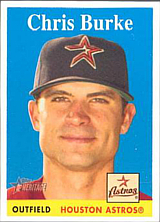 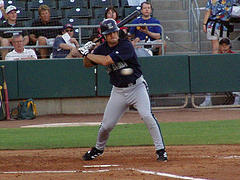 Chris Burke's one shining moment in MLB came when he struck an 18th-inning walk-off home run in Game 4 of the 2005 NLDS against the Atlanta Braves to send the Houston Astros to the NLCS. Ordinarily a utility player, his 2-for-3 (both XBH) in the Division Series bought him 20 at-bats in the League Championship Series, where he hit 6-for-20 with a triple, a home run and 3 RBI as the Astros marched to their first World Series. There, Chris was a non-factor (0-for-5, 1 run scored) in a series sweep by the Chicago White Sox.

Burke was the seventh player in history to hit a walk-off home run that ended a postseason series:

He was signed by scout Danny Watkins as a first rounder in the 2001 amateur draft out of the University of Tennessee. Chris reached the big leagues in 2004 and enjoyed his finest season playing all over the diamond in 2006, batting .276/.347/.418 in 123 games and 366 at bats. He struggled the next year and slid out of the big leagues after 32 games with the San Diego Padres in 2009.