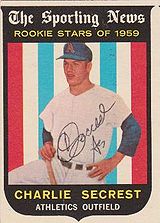 Charles Secrest played 10 seasons in the minors, peaking at AAA.

By 1958, Secrest was playing in AA with the Little Rock Travelers and looking promising - .281 AVG, 33 2B, 8 3B, 21 HR, .477 SLG. He tied Don Dillard and Sammy Meeks for 13th in the Southern Association in dingers, was third in doubles (behind Mel Clark and Steve Demeter) and tied Chuck Cottier, Jack Reed and Russ Snyder for third in triples.

Buckwheat was in AAA in 1959, hitting a reasonable .287/.361/.372 for the Portland Beavers. He injured his knee on the basepaths shortly after the team had acquired Snyder, possibly costing him a chance at the majors (Snyder would be called up instead). Among his teammates, only Snyder and George Freese had a higher average while receiving over 200 AB. In 1960, he was 5 for 27 with 4 walks, a double and a homer for the Dallas-Fort Worth Rangers, battling an arm injury. Demoted to the Shreveport Sports when he refused assignment to the Hawaii Islanders because it would put him at too great a distance from family, he batted .251/.361/.343 in '61. The next year, Charles was back in AAA with a composite .264/.350/.394 line for the Portland Beavers and Albuquerque Dukes. He had 14 outfield assists to only three errors. His .984 fielding percentage for Albuquerque led all Texas League outfielders with over 100 chances.

This biographical article is missing the person's: birth place
Retrieved from "https://www.baseball-reference.com/bpv/index.php?title=Charles_Secrest&oldid=904155"
Categories: