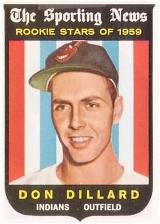 Before the 1955 season Don Dillard was signed as an amateur free agent by the Cleveland Indians. The highly regarded lefthanded-hitting outfield prospect was assigned to the class D Vidalia Indians. The 18-year-old appeared in 27 games, and hit .247 in his first season. Don spent four more seasons in the minors (1956-1959), had a good year with the AA Mobile Bears in 1958, hitting .319 with 21 homers and in 1959 he was hitting at a .283 mark when Cleveland called him up for his first look at the major leagues. He hit .400 (4 for 10), totally in a pinch hitting role.

Following a team-high .294 for the International League champion Toronto Maple Leafs in 1960, he was brought up again to Cleveland for a season-end look and that turned into Don becoming a spare flychaser and pinch hitter for the Indians in 1961 and 1962, hitting .325 (26 for 80) off the bench during the two seasons.

In 1961 Don hit the first of his 14 career big league homers off Hall of Famer Early Wynn. He appeared in 74 games and hit at a .272 clip. In 1962 his batting average fell to .230 and on November 27th, he was traded with Frank Funk and Ty Cline to the Milwaukee Braves for Joe Adcock and Jack Curtis. He was with Milwaukee in 1963 and 1965 before concluding his major league journey with a career .244 average.

Dillard finished his pro baseball career in the minors with the Jacksonville Suns in 1966 and the Toledo Mud Hens and the Montgomery Rebels in 1967. Don had been in pro baseball for 13 active seasons, 1955 through 1967 and wound up his minor league days with a .281 average.

Dillard, who has owned a marina and sporting goods business, resides in Waterloo, South Carolina. He and former Negro Leagues player Rosel Williams operate a baseball camp in Greenwood, SC.