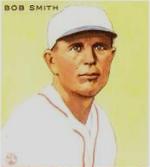 Bob Smith was one of the workhorses of the Boston Braves' pitching staffs during the lean years of the 1920s and 1930s.

A late bloomer, he began his minor league career with the Beaumont Exporters of the Texas League in 1921, hitting .281 in 130 games as the team's third baseman. He was already 26 at the time, although his baseball age was listed at 23 (with a birth year of 1898), three years younger than his actual age. He moved up to the New Orleans Pelicans of the Southern Association in 1922 and switched to shortstop, where he hit .269 in 140 games. After the season, the Braves purchased his contract and made him their starting shortstop in 1923. He hit .251 in 115 games, with 16 doubles and 3 triples, but no homers. In 1924, he split his time between shortstop and third base but still got into 106 games, batting .228 with 12 doubles, 3 triples and the first two home runs of his major league career. With the live ball era now in earnest, this was a very poor batting line, and by 1925, Smith had become a utility player, logging 21 games at shortstop, 15 at second base and one in the outfield while batting .282 in 58 games; however, he caught a huge career break when his manager Dave Bancroft began to use him on the mound, where he did relatively well. In 13 games, including 10 starts, he threw six complete games, posted a 5-3 won-loss record, with an ERA of 4.47. He only struck out 19 while walking 36, but it was still encouraging for someone with almost no professional pitching experience (he had pitched two games at Beaumont).

From 1926 onward, Bob Smith was almost exclusively a pitcher, although he did play the occasional game in the infield and would be used from time to time as a pinch hitter. He won in double figures every year from 1926 to 1931, in spite of playing with weak teams. He was never a strikeout artist - his career high was 84 in 1930, but he had good control and a rubber arm; in a typical year, he would make between 25 and 30 starts, pitch 15 complete games and throw 225 innings, and then relieve in 10 more games. That made him quite a valuable property even if he was not dominating. In 1931 he got a first chance to play for a winning club when he was sent to the Chicago Cubs in a trade along with Jimmy Welsh in return for Bill McAfee and Wes Schulmerich. He had the best season of his career for the third-place team, going 15-12, 3.22 with 2 saves. In 1932, the Cubs made it to the World Series, but he was demoted to a swingman role, pitching 119 innings but only making 11 starts with a 4-3 record and a 4.61 ERA. He pitched one inning in Game One of the Series on September 28, giving up a run in an inning of mop-up relief in a 12-6 loss to the New York Yankees, who were on their way to a convincing Series sweep.

Bob Smith started the 1933 season with the Cincinnati Reds, after being included in a major trade that brough slugging outfielder Babe Herman to Chicago. He went 4-4, 2.20 in 16 games, but for some reason was placed on waivers and ended up back with Boston at the end of July, where he was 4-3, for an overall record of 8-7, 2.65. In 1934, he is listed in the minor league database as having played 40 games at catcher for the Toronto Maple Leafs and Baltimore Orioles of the International League but these games were played by Robert Smith, a lifelong minor leaguer who was a contemporary. For his part, Bob Smith pitched a full season for the Braves (6-9, 4.66 in 39 games, 121⅔ innings). He continued to pitch for the Braves over the next three seasons, logging an 8-18 record for the last-place 1935 team which went an appalling 38-115. He saved a career-high 8 games in 1936, then was released after 18 appearances in relief in the 1937 season, playing his last game in early August.

Already 43 years-old, Smith was not yet done with baseball. He took a job as player-manager of the Jacksonville Tars of the South Atlantic League in 1938, going 0-1 in 11 games. When he was fired as manager partway through the season, he latched on to the Indianapolis Indians of the American Association. Smith became a coach for Kiki Cuyler with the Chattanooga Lookouts in 1939-1942 and Atlanta Crackers in 1944-1948.

Smith is among the franchise leaders for both the Boston Braves and the Atlanta Braves in a number of pitching categories. In the 13 seasons he spent with the team (11 in which he pitched), he appeared in 349 games on the mound and threw 1813 innings, with a record of 83-120, 4.06, and 36 saves. Ironically, though, his most memorable season and only postseason appearance were both with the Chicago Cubs. As a hitter, he batted .242 in 1689 at-bats, with 64 doubles, 17 triples and 5 home runs, driving in 166 runs.