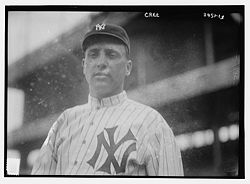 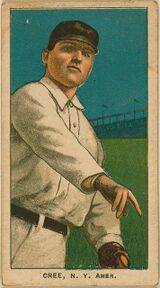 Birdie Cree is a former outfielder who spent his entire eight year career with the New York Yankees.

Prior to the bigs, Cree attended Penn State at the same time as Irish McIlveen, a big league contemporary. He was a schoolteacher and taught eighth grade while playing in the minors. He played in the High Hat League, then went to play ball in Burlington, VT and with the Williamsport Millionaires in the Tri-State League.

Cree made his major league debut on September 17, 1908 with the New York Highlanders, the predecessor to the now Yankees. Although he was solid in the beginning of his career, his 1911 season was extraordinary. He achieved or tied career highs in every major statistical category, with the highlights being 22 triples (which tied him for 32nd all-time in a season and the most in a season for a right-handed hitter in the American League), 48 stolen bases and a .348/.415/.513 line. He was third in the league in steals and, because of his great performance, tied with Hall of Famer Tris Speaker for 6th in the voting for the MVP. On September 28, he stole four bases in one game against the St. Louis Browns.

Cree was on pace for another amazing season in 1912, but his year was cut short after taking a pitch to the wrist from Buck O'Brien of the Boston Red Sox. He only played 50 games, hitting .332/.409/.453. Cree never again lived up to his '11 season, playing over 100 games only once in the final four years of his career. He was sold to the Batimore Orioles after a mediocre 1913. On July 6, 1914, the Yankees sent Bill Holden and cash to the club to get him back. Rejecting baseball disdainfully, he ended his career in 1915 with a .292 career batting average, 132 stolen bases, 62 triples and a career .962 fielding percentage. Cree retired from baseball because he "...had no intention of going to the bush leagues". During his major league career, he was twice the victim of the hidden ball trick, in 1910 (by George Moriarty and Jim Delahanty) and 1913 (by Ivy Olson).

After baseball, he entered the world of banking. On November 7, 1942 at the age of 60, Cree died in Sunbury, PA after a long illness. At the time of his death, he was a cashier at the First National Bank of Sunbury. He was laid to rest in Pomfret Manor Cemetery in Sunbury.