Note: This page is for 1940s catcher Bill Baker; for others with a similar name, click here. 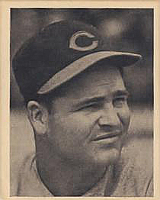 Bill Baker had a seven-year career in the major leagues as a catcher between 1940 and 1949.

Bill went to Boyden High School in Salisbury, NC, where he was a star catcher. He played semi-pro ball after high school. As a 29-year-old rookie in 1940, he played 27 games for the World Series champion Cincinnati Reds, where Ernie Lombardi was the regular catcher and Willard Hershberger was the back-up. Tragically, with Lombardi injured, Hershberger committed suicide in August. The Reds used Baker, who hit .217, and activated coach Jimmie Wilson to share catching duties down the stretch. Wilson got the bulk of the playing time in the World Series against the Detroit Tigers, although Baker did get in three games as his replacement and hit a single in Game 1.

He later played for the Pittsburgh Pirates, where Al Lopez was the regular catcher, being sold there early in the 1941 season. He stayed on in 1942 and 1943, getting most of his playing time the latter year, when he moved up from third-stringer to back-up. Baker joined the United States Navy in March 1944 and was discharged in December 1945, playing on a service team during that time coached by Mickey Cochrane. He returned to the Pirates in 1946 but was cut before the start of the 1947 season and spent thee year in the minor leagues with the Columbus Red Birds. With the parent St. Louis Cardinals in 1948, Del Rice and Del Wilber were the regular catchers with Joe Garagiola the third-stringer. Bill hit very well at Columbus and was called up to replace Garagiola on July 4th. He hit a solid .294 in 45 games, sharing playing time with Rice as Wilber became the odd Del out. He returned to the Cardinals in 1949, but saw very little action behind Rice and Garagiola and was released on August 19th.

He was a Chicago Cubs coach in 1950, then returned to playing in 1951, going to spring training with the Toledo Mud Hens but ending up with the Syracuse Chiefs of the International League, where he played 103 games at age 40. He moved down to the Little Rock Travelers of the Southern Association in 1952, but was released in May after making only one appearance as a pinch-hitter. This time, it was the end of the line as a player. He immediately went into umpiring after retiring, working the North Carolina State League beginning June 1, 1952. He continued to umpire in leagues around his North Carolina home for a few seasons before being appointed to the American Association staff in 1956. Only one year later, in 1957, he became a National League umpire when he and Vinnie Smith replaced Al Barlick and Larry Goetz, who were both sidelined with medical problems. Barlick returned after a one-year absence in 1958, and the National League decided to keep Smith on staff. Baker umpired two more seasons in the American Association, but retired after 1959, blaming bad knees earned through a lifetime of crouching behind the plate.

After his baseball career, Bill went back to North Carolina, working for Raney Motor Company and then Aaron Chevrolet as a salesman. He was also active in American Legion baseball, serving as commissioner of the Rowan County league. His wife of 52 years, Valdois, passed away in 1989 and he moved to Myrtle Beach, SC, to be close to his daughter. That is where he passed away in 2006 at the age of 95.