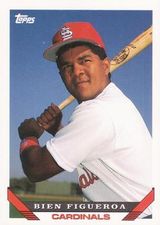 Bien Figueroa was drafted in the 5th round (130th overall pick) by the St. Louis Cardinals in the 1986 amateur draft.

Figueroa went on to play with the Montreal Expos, Texas Rangers, and Colorado Rockies organizations in addition with a tour in Taiwan in the CPBL, before joining the Baltimore Orioles in 1996, when he played with the AAA Rochester Red Wings. There, he batted .312 with 1 HR and 16 RBI to finish up his minor league career.

Figueroa became a coach with the Bowie Baysox in 1997, and served with them until 1999. In 2000, he was a coach on the Frederick Keys for one year. The Baltimore Orioles returned Figueroa to Bowie for the 2001 season. In 2002, Baltimore named Figueroa manager of the Bluefield Orioles of the Appalachian League, where Figueroa went 45-23 (1st) and led the Bluefield Orioles to the Appalachian League finals. In 2003, Figueroa was promoted to the Baltimore Orioles Minor League Outfield/Baserunning Instructor. In 2004, Figueroa was named manager of the A Delmarva Shorebirds, and led them to a 69-69 record. He was then promoted to manager of the Frederick Keys, where he led them to a 84-63 record, which was good for first place and the first Carolina League Championship since 1990.

His twin sons, Cole Figueroa and Correy Figueroa, were both selected by the Toronto Blue Jays in the 2006 amateur draft. Both were again drafted in the 2008 amateur draft and played pro ball, with Cole reaching the major leagues in 2014.