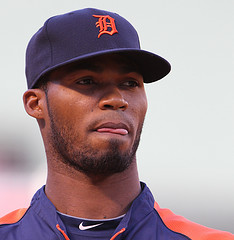 Following the 2010 season, he became a free agent and signed a contract with the Detroit Tigers. He began the year with the Toledo Mud Hens, fanning eight in four shutout innings. He was then called up to the majors to replace Robbie Weinhardt. He made his major league debut on April 15, pitching two scoreless innings in relief against the Oakland Athletics with the Tigers trailing 1-0. Detroit managed to tie the score in the 9th, and won the game 8-4 after a wild 10th inning, handing manager Jim Leyland his 1,500th career win. Overall, he had a solid rookie year for the Division-winning Tigers, pitching in 41 games with an ERA of 1.87 and a record of 6-1; he struck out 67 in only 43 1/3 innings. He was roughed up by the New York Yankees in two appearances in the ALDS, giving up 3 runs in a third of an inning, but he did better in the ALCS against the Texas Rangers, when he gave up no hits and struck out two opponents in an inning and two thirds. He was bothered by occasional discomfort in his right elbow throughout the season, spending time on the disabled list with inflammation at one point. In December 2011, Dr. James Andrews performed surgery for a stress fracture, putting him out of action until September 2012. He sparkled in limited big league time, with a 0.68 ERA and 18 strikeouts in 13 1/3 innings. He made three postseason appearances that year, allowing the third of Pablo Sandoval's home runs in Game 1 of the 2012 World Series.

Al spent three more years in the Tigers bullpen (2013-2015), enjoying his finest success in 2014 with a 2.63 ERA and 63 strikeouts in 57 1/3 innings. Following a tougher 2015 campaign, he was non-tendered and signed a big league deal with the Los Angeles Angels. Since 2016, he has appeared in just 23 big league games, split among the Halos, Kansas City Royals and Chicago White Sox.