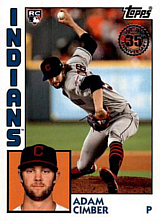 Submariner Adam Cimber has been a relief workhorse, making 224 appearances in his first four major league seasons after reaching the big leagues in 2018.

In 2018, he made the Padres' Opening Day roster and debuted in the opener, giving up one earned run in one inning of relief work and taking the loss against the Milwaukee Brewers. Cimber became the first player to wear uniform number 90 in a major league game. He was issued the number in spring training and liked it, since he was born in 1990. When he made the team, he was offered more traditional numbers, but kept 90 saying it reminded him of the mentality he needed to grind through the minors. He went 3-5, 3.17 in 42 outings for the Padres during the first half, then, two days after the 2018 All-Star Game, he was traded to the Cleveland Indians, along with fellow reliever Brad Hand, in return for top prospect Francisco Mejia. He posted a 4.05 ERA in 20 games for the Tribe, making a pair of appearances in the ALDS loss to the Houston Astros. Setting down roots in Cleveland, he made 68 appearances in 2019, logging his first career save with a 4.45 ERA in 56 2/3 innings. In 2020, he made 14 appearances, going 0-1, 3.97 and logging just 11 1/3 innings in the abbreviated season. In his only postseason outing, facing the New York Yankees in Game 1 of the Wild Card Series on September 29th, he was roughed up, allowing 3 runs on 2 hits and a walk in two-thirds of an inning in a 12-3 loss. Following the season, he was designated for assignment on November 25th, then on November 30th, his contract was sold to the Miami Marlins.

He made 33 appearances for the Marlins over the first three months of the 2021 season, going 1-2 with a 2.88 ERA in 34 1/3 innings. However, the Marlins were having trouble repeating their Cinderella season of a year before, and there was little point in keeping a veteran middle reliever on the roster with a number of contending teams looking for bullpen help. On June 29th, they swung a deal with the Toronto Blue Jays, sending Cimber and another veteran, OF Corey Dickerson, who was on the injured list at the time, in return for IF Joe Panik and P Andrew McInvale. He pitched even better for the Blue Jays and was in fact a true godsend, going 2-2, 1.69 with 1 save in 39 appearances. He was particularly adept at completing an inning when another pitcher had put one or two men on base and could not get himself out of the jam. He was a true vulture at the start of the 2022 season, notching a major league-leading 4 wins in the Jays' first 17 games, all of them in relief. He was pitching extremely well during that stretch, with an ERA of 2.00 in 9 innings over 8 appearances, with just 6 hits and no walks allowed. He also recorded the third save of his career during this stretch when the Jays were winning a lot of close games, many of them after coming back. In two of his wins, including in a 10-8 win over the Texas Rangers on Opening Day, April 8th, he had allowed the tying run to score before his teammates had scored the go-ahead run in their next turn at bat, so there was some luck involved. He finished the season at 10-6, 3.20, with 4 saves, tying for the American League lead in games pitched with 77 (with Emmanuel Clase of the Cleveland Guardians). he was one of the Blue Jays' most reliable relievers all season, and was used in both games of the Wild Card Series in which the Jays were swept by the Seattle Mariners, not giving up a run in one inning.