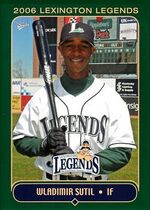 He signed with the Arizona Diamondbacks as a minor league free agent in 2012, hitting .222 with 6 stolen bases in a backup role for the Mobile BayBears and Triple-A Reno Aces. He joined the Southern Maryland Blue Crabs of the independent Atlantic League for 2013 and hit .240 with 11 stolen bases in 110 games.

This biographical article is missing the person's: full name
Retrieved from "https://www.baseball-reference.com/bpv/index.php?title=Wladimir_Sutil&oldid=1258471"
Categories: