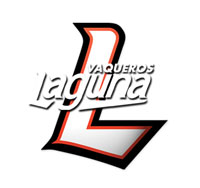 In 2003, after years of futility, the Algodoneros de Torreon became the Vaqueros Laguna (or Laguna Cowboys in English). The Mexican League club plays in Torreon, Coahuila and represents the metropolitan area know as Unión Laguna which also includes the city of Gomez Palacio, Durango.

The team had a very difficult first season in 2003. They started off well enough, going 23-25 through May 13 under manager Alex Taveras; however, he left the team, and the Cowboys went into a tailspin, as the team played under .300 for his two successors, Roberto Mendez and Jose Juan Bellazetin, finishing at 39-71, 15th out of 16th in the League. The team's best hitters were 2B Carlos Rodriguez, who hit .321 with no power, and OF Cornelio Garcia, who hit .371 in 58 games between stops with the Guerreros de Oaxaca and Mexico City Red Devils. They improved to 45-54, good for 10th overall, in 2004, but were swept in four games by the Saraperos de Saltillo in the first round of the playoffs.