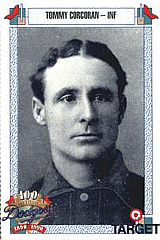 Tommy Corcoran was a slick-fielding shortstop who had an 18-year-career before and after 1900. He is the only man in history to score 1,000 runs with an on-base percentage under .300.

Corcoran spent most of his career with the Cincinnati Reds, ten straight seasons from 1897 to 1906. He debuted in the Players League in 1890 with the Pittsburgh Burghers, and then played a season in the City of Brotherly Love with the Philadelphia Athletics in 1891, before settling in comfortably with the Brooklyn Bridegrooms in 1892. In 1894, he enjoyed his only .300 season, batting .300/.329/.432 with a career-high 127 runs scored, returning to prior norms one season later. A barehanded fielder, Tommy was one of the last to make the transition to a glove, later leading the National League in assists in 1898. He finished his career as a second baseman with the New York Giants in 1907. Remarkably, four Hall of Fame infielders rank among his top 10 in similarity scores, though none are truly similar: contemporaries Bid McPhee and Bobby Wallace, Rabbit Maranville and a man who played nearly one hundred years later, Ozzie Smith.

In retirement, he was a Federal League umpire in 1915. He was the brother of Phil Corcoran, a long-time minor leaguer in the Connecticut State League and around New England.