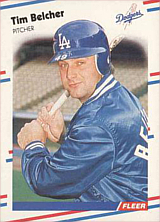 Pitcher Tim Belcher was the first overall pick in the 1983 amateur draft by the Minnesota Twins, but he did not sign with the club. He instead joined the USA national team in the 1983 Pan American Games (Bronze Medal) and Intercontinental Cup (Silver Medal). He was eligible for the draft again in January 1984 and was selected first overall by the New York Yankees in what was considered a major coup. But because of a front office mix-up, his name was left off the team's protected players' list for the free agent compensation draft and he was selected by the Oakland Athletics on February 8. George Steinbrenner was livid over this development and blamed young general manager Murray Cook for it, firing him in short order.

Belcher pitched two one-hitters. The first was on July 21, 1990, against the Pittsburgh Pirates as a member of the Los Angeles Dodgers. The lone hit was a fourth inning single by Jay Bell. His second one-hitter was on May 26, 1993, as a member of the Cincinnati Reds against the Atlanta Braves. The lone hit was a first inning double by Deion Sanders. He also threw three two-hitters in his career. His game high in strikeouts was 13 on September 20, 1992, with the Reds against the San Diego Padres. On the bump, he threw a "rising" fastball and a slider.

Belcher retired during spring training 2001 due to an elbow injury. Since then, he has worked in the Cleveland Indians front office. In 2010, he was named the team's pitching coach, resigning at the end of the 2015­ season.