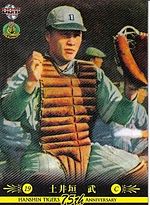 Returning to the field in 1946, he hit .325/.381/.442 with 10 triples, 70 runs and 70 RBI, striking out only 19 times in 412 AB. The pint-sized backstop was third in the Japanese Professional Baseball League in average behind Masayasu Kaneda and Yutaka Tagawa.

Doigaki later changed his last name to Wakamatsu. He coached for Hanshin, scouted for the Lotte Orions and was a baseball commentator. He died of pneumonia at age 69.

This biographical article is missing the person's: death place
Retrieved from "https://www.baseball-reference.com/bpv/index.php?title=Takeshi_Doigaki&oldid=1188108"
Categories: