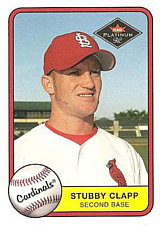 Stubby Clapp saw action with the St. Louis Cardinals in 2001, batting .200 in 25 at bats (23 games) while driving in a run. A Team Canada veteran in international play, he worked as a drug and alcohol counselor before taking up baseball.

Clapp was on the only Canadian team (through 2019) to win a World Junior Championship; he was on the club that won the 1991 event. The 1991 Canadian National Junior Team was inducted into the Canadian Baseball Hall of Fame the next year. Clapp hit .222/.364/.222 as Canada's utility man in the 1994 Baseball World Cup. In the 1999 Pan American Games, Clapp hit .348 to help Canada claim the Bronze Medal and the best record in the competition. He represented Canada at the 2004 Athens Olympic Games. In the 2006 Americas Qualifier for the 2008 Olympics, Clapp hit .270/.400/.351 and stole two bases for Team Canada. Canada failed to earn an Olympic berth but they did get a spot in the 2008 Final Olympic Qualification Tournament. In the latter event, they earned a spot in the Summer Games. Clapp hit .364/.517/.500 with 6 walks and 6 runs scored in seven games at second base, making numerous big plays. Against Taiwan, he came to bat with two out in the 9th and a 5-4 deficit. Facing closer Chia-Jen Lo, Clapp beat out an infield hit by diving into first base. He scored the tying run on a Michael Saunders single, forcing extra innings; Canada went on to win, 6-5. He reached against Hyun-jin Ryu in the first inning against South Korea and scored on a Matt Rogelstad homer in a 4-3 victory. Those were two big wins as Taiwan and South Korea also moved on to the Olympics. In their final game, against Germany, Clapp drew a leadoff 10th-inning walk from Dirk Fries. After the bases were loaded with one out, Ryan Radmanovich grounded to Donald Lutz, who threw home. Clapp slid hard into home to prevent Simon Gühring from turning a double play; the move helped Canada win the game but Clapp was injured.

Clapp was the hitting coach for the Greeneville Astros in 2007 and the Lexington Legends in 2008. It was originally reported that the Houston Astros forbade Clapp permission to play in the 2008 Olympics; in May, the Astros said Clapp would be allowed to play. Clapp hit .286/.323/.429 with 5 runs scored in 7 games in Beijing, outperforming many of Canada's younger players. He made one error while playing every game at second base. Clapp made his final appearance for Team Canada at the 2009 WBC. He did not get much playing time as he was only brought in as a pinch hitter in the eighth inning of Canada's game against Italy on March 9th at Rogers Centre in Toronto, flying out to center field. He played second base in the game's final inning and was given a rousing ovation by the crowd. [1] He returned to Greeneville in 2009 and Lexington in 2010. He was named the new manager of the Tri-City ValleyCats in the New York-Penn League in December 2010. Outside of the short season in the New York-Penn League, he was outfield coordinator for the Astros organization. [2]

Clapp later coached for Canada in the 2011 Baseball World Cup (Bronze Medal), 2011 Pan American Games (when they won their first Gold ever at a Pan American Games) and 2013 WBC Qualifiers. In 2013, Clapp was appointed hitting coach of the Dunedin Blue Jays in the Class A Florida State League. That year, he was also a coach for Team Canada at the 2013 WBC. Clapp was also a coach for Dunedin in 2014. He coached for Canada when they won Gold at the 2015 Pan American Games; only Cuba had won more than one Pan Am baseball Gold before Canada from 2011-2015. Clapp became hitting coach of the New Hampshire Fisher Cats from 2015-2016. After managing the Memphis Redbirds for a couple of seasons, he was promoted to first base coach of the Cardinals in 2019.

"Stubby" is a family nickname; he is the third generation to be called "Stubby". His son, Cooper, is also known as "Stubby". He is also known to perform backflips on occasion while on field, as a tribute to Ozzie Smith. [3]

There is a Stubby Clapp bobblehead on display at the Canadian Baseball Hall of Fame, depicting him in a Memphis Redbirds uniform (the Triple A affiliate of the Cardinals). [4]