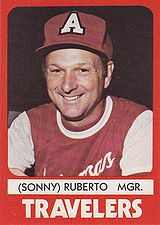 Catcher Sonny Roberto played professionally for 13 years and later was a big league coach and a minor league manager.

Signed by the St. Louis Cardinals out of high school, Ruberto made his pro debut in 1964. While with the St. Petersburg Cardinals in 1966, he played in what was the longest game in organized baseball history up to that time; he was the starting catcher in the June 14th game against the Miami Marlins. Luckily for him, he moved to shortstop in the 10th inning and did not have to crouch for the entire affair, unlike his opponent, Charlie Sands.

Early in the 1969 season, Ruberto was traded to the expansion San Diego Padres. He was immediately brought up to the majors and remained with the team for the rest of the year. He played sparingly as a backup to Chris Cannizzaro, hitting .143 in 19 games. At age 24, he managed the Lodi Padres for part of the next season in 1970 and then was dealt to the Cincinnati Reds. Starting in 1971, he played for the Indianapolis Indians for 6 straight seasons. He also returned briefly to the majors in September 1972, going hitless in a pair of games for the Reds.

After his playing career ended, Ruberto was the Cardinals first base coach in 1977 and 1978. He then managed in the Cardinals' farm system for three years, spending one season with each the St. Petersburg Cardinals (1979), Arkansas Travelers (1980), and Erie Cardinals (1981). He led Arkansas to a Texas League crown in 1980.

Following his baseball days, Ruberto worked in the photography business for many years. He died of cancer in 2014 at age 68.