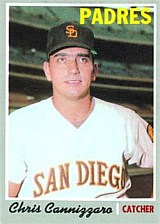 “He can’t hit... [but a] catcher like this kid, who can throw, will let my pitchers pay attention to the hitter instead of worrying about a runner on first base.” - Casey Stengel, to The Sporting News, June 16, 1962

Journeyman catcher Chris Cannizzaro was an original New York Met. He had the misfortune of having a name that was easy to mispronounce: Mets' manager Casey Stengel called him "Canzaroni" and Chicago Cubs broadcaster and Hall of Famer Lou Boudreau tried "Canzanaro." In 1969, he would become an original San Diego Padre and the first to be named to an All-Star Game. One of the slowest men in baseball, Chris once failed to score from second base on a clean double. He never scored more than 27 runs in a season, even though he was a regular for four seasons. He was an adequate defender with good enough skills to stick in the bigs for 13 seasons. He ended his career with San Diego in 1974.

Cannizzaro was an Atlanta Braves coach from 1976 to 1978 and managed in the California Angels system for several seasons. After serving as an assistant coach at the University of San Diego, he was the school's Director of Baseball Operations for a spell, prior to his death from emphysema in 2016. He was survived by a son, Chris Jr., who played minor league ball.