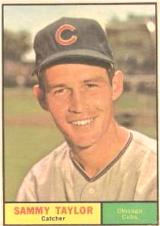 Sammy Taylor was traded from the Milwaukee Braves with Taylor Phillips to the Chicago Cubs for Eddie Haas, Don Kaiser and Bob Rush on December 5, 1957. He made his big league debut on April 20, 1958 against the St. Louis Cardinals. Appearing as a pinch hitter for Gene Fodge, he drew a walk in his first plate appearance.

Taylor was involved in a rather peculiar situation in a game on June 30, 1959, between the Cubs and the St. Louis Cardinals. Stan Musial was at the plate, with a count of 3-1. Pitcher Bob Anderson's next pitch was errant, evading Taylor and rolling all the way to the backstop. Umpire Vic Delmore called ball four on the pitcher, however Anderson and Taylor contended that Musial foul tipped the ball. Because the ball was still in play, and because Delmore was embroiled in an argument with the catcher and pitcher, Musial took it upon himself to try for second base. Seeing that Musial was trying for second, Alvin Dark ran to the backstop to retrieve the ball. The ball wound up in the hands of field announcer Pat Pieper, but Dark ended up getting it back anyway. Absentmindedly, however, Delmore pulled out a new ball and gave it to Taylor. Anderson finally noticed that Musial was trying for second, took the new ball, and threw it to second baseman Tony Taylor. To Anderson's disappointment, the ball flew over the runner's head into the outfield. Dark, at the same time that Anderson threw the new ball, threw the original ball to shortstop Ernie Banks. Musial, though, did not see Dark's throw and only noticed Anderson's ball fly over the second baseman's head, so he tried to go to third base. On his way there, he was tagged by Banks, and after a delay he was ruled out. [1]

In 1963 - his final season - Taylor played for three different teams. He began the year with the Mets and hit .257 in 41 at-bats with them. On July 1st, he was traded with Charlie Neal to the Cincinnati Reds for another catcher, Jesse Gonder. He played in three games for the Reds, collecting no hits in six at-bats. On August 1st, he was traded to the Cleveland Indians for Gene Green. He collected three hits in 10 at-bats for the Indians. Overall, he hit .235 with no home runs and seven RBI in 51 at-bats. He played his final game on August 6th.