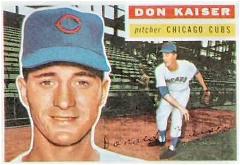 A 6' 5" right-hander, Don Kaiser received a reported $50,000 bonus to sign with the Chicago Cubs on February 8, 1955 after going 49-1 with seven no-hitters in high school. Kaiser who claimed he only received a $15,000 bonus, signed after one semester at the East Central University in Oklahoma, where he was on a basketball scholarship. Don had to remain on the big league roster because of the bonus rule of the time and was used sparingly in eleven relief appearances with no decisions in 1955.

Don got his most publicity when he was first up with Chicago in 1955 and the sportswriters got wind of the story that a cab driver had taken him several miles out of the way to fleece him out of his money. The story in the following day's paper was headlined, "Bonus Baby Gets Lost In City." On June 2, 1956, Kaiser made his first major league start and was very impressive with a two-hit 8-1 victory over the defending world champion Brooklyn Dodgers. Don only allowed hits to future Hall of Famers Pee Wee Reese and Duke Snider. Kaiser finished that year with a 4-9 record with a 3.59 ERA.

Don divided the 1957 season between the Cubs, where he went 2-6 with an even 5.00 ERA in 20 appearances, and the Portland Beavers of the Pacific Coast League, where he went 6-5 with a 2.72 ERA. On December 5, 1957 he was traded by the Cubs along with Eddie Haas and Bob Rush to the Milwaukee Braves for Taylor Phillips and Sammy Taylor, but Don never pitched another game in the majors and ended his big league career with a 6-15 record and a 4.15 ERA.

Kaiser retired after four more seasons in the minors, where his best year came in 1959 when he went 10-3 with a 3.37 ERA for the Louisville Colonels, helping his team to a first-place finish in the East Standings of the American Association. Don's last year in pro baseball was 1961 with the Birmingham Barons of the Southern Association where he finished up at age 26 with a minor league career record of 32-28 and a 4.52 ERA.

Kaiser returned to his native Oklahoma and worked as a jailer for Pontoto County before becoming a deputy sheriff. Don retired in 1992 in Ada, OK, where as of 2013, he continued to work part time as a district court bailiff.