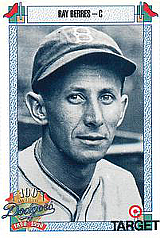 "To me, he's the best pitching coach I ever came across. I never saw him get upset with one of his pitchers. Of course, Lopez would do that for him." - Gary Peters

"I was offered a few managerial jobs, but I always turned them down. It wasn't meant to be. I'm not the type. I could hire, but, doggone it, I couldn't fire." - Ray Berres

The defensive reputation of catcher Ray Berres, especially his arm, enabled him to play for half the National League teams of his day, although he spent most of his big league career as a backup. His main teammates were Jim Tobin, Johnny Cooney, Max West, Arky Vaughan, Van Mungo and Buddy Hassett.

After his playing career, Berres managed the Richmond Colts in 1946 until August 12th. He was the bullpen catcher for the Boston Braves in 1947, coached the Milwaukee Brewers in 1948 and was Chicago White Sox pitching coach from 1949 to 1966,and again in 1969. This included a World Series appearance in 1959. During his tenure on the Sox coaching staff, he was credited with helping many notable pitchers, including Early Wynn, Billy Pierce, Gary Peters, Joel Horlen, Bob Shaw, Juan Pizarro, Tommy John, Hoyt Wilhelm, and Wilbur Wood.

He died of heart failure and pneumonia in Kenosha, WI, the town he was born. He lived to be almost 100, and was the second oldest living major leaguer when he died in 2007.