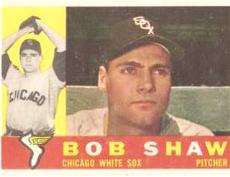 Signed by the Detroit Tigers in 1953, Shaw reached the majors late in the 1957 campaign. He began the next summer, 1958, back with Detroit, but after he refused a demotion to the minors, he was dealt to the Chicago White Sox. Primarily a reliever in his first season in Chicago, he began 1959 in the bullpen as well before being moved into the starting rotation in mid-May. He went on to post an 18-6 record that year, led the American League with a .750 winning percentage, and finished third in Cy Young Award voting, as his team captured the AL pennant. He made two starts in the World Series, outperforming Sandy Koufax in Game 5 to earn a victory, but the White Sox fell to the Los Angeles Dodgers in 6 games.

Shaw's record slipped to .500 in 1960, and after holding out for more money, was traded to the Kansas City Athletics early in the 1961 campaign. After that season, he was sent to the Milwaukee Braves. In 1962, he went 15-9 with a 2.80 ERA for Milwaukee and pitched two scoreless innings in the All-Star Game. The next year, 1963, he was charged with a big league record 5 balks (including 3 in one inning) in a game against the Chicago Cubs on May 4th. Following the season, he was dealt to the San Francisco Giants, and after being used as a reliever in 1964, he won 16 games in 1965, including a June 25th one-hitter against the Philadelphia Phillies. That summer, he was part of a Giants rotation that included Hall of Famers Juan Marichal, Gaylord Perry and Warren Spahn.

After a slow start for the Giants in 1966, Shaw's contract was sold to the New York Mets in June. About a year later, he was sent to the Chicago Cubs, where he ended his playing career.

Following his playing days, Shaw managed the Daytona Beach Dodgers in 1969. He was then a minor league pitching coach for the Los Angeles Dodgers from 1970 to 1972, before replacing Stan Wasiak at Daytona Beach in 1972. He was a Milwaukee Brewers coach in 1973. Away from the diamond, he was a successful real estate investor in Florida.