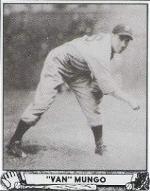 Best remembered for the use of his name in the song Van Lingle Mungo, Van Mungo had a long career in the majors with the Brooklyn Dodgers and the New York Giants. He was the youngest player in the league when he broke in in 1931, and went 14-7 in his last season at age 34 in 1945. Prior to making his major league debut, he had gone 15-5 with the 1931 Hartford Senators.

Mungo was the top strikeout artist of his time, leading the National League in strikeouts per nine innings from 1935 to 1937. The Dodgers were not very good when he was with them, and it took them a decade to finally win the pennant in 1941, when Mungo pitched only two games with them. Mungo struggled with an arm injury during the second half of his career,

Mungo had a reputation for having a temper, as is shown in this quip from his manager Casey Stengel:

Mungo and I get along fine. I just tell him I won't stand for no nonsense, and then I duck." - Casey Stengel